Lighting The Lamp: Blues Reinforcements A Christmas Present In April

Share All sharing options for: Lighting The Lamp: Blues Reinforcements A Christmas Present In April

Is this April or December? For many Blues fans, it feels like December, just as a kid does on Christmas day after opening up Uncle Doug's presents: defensemen Jay Bouwmeester and Jordan Leopold. And what makes it even more exciting and joyous is that Armstrong did not overpay as neither deal included any roster players or amateur Ty Rattie or any other Blues' highly-regarded prospects. In two fell swoops, the left side of the defense has been firmed up and the Blues arguably have the best starting six defensemen in the entire league. And now that the trading deadline has past, it is safe to say that there is plenty of defensive depth as the Blues will carry three two defensemen of NHL caliber in preparation for injuries and/or the need to rest veterans due to the cramped, shortened schedule which sees the Blues playing the remaining 14 games in only 23 days.

Of course, the fly in the soup (or the hair in the salad, whatever you prefer) concerns the latest injury to goaltender Jaro Halak, who tweaked his groin (again) and is out indefinitely (or three weeks, whatever you prefer). Considered to be the Note's numero uno net-minder, Halak's loss is immeasurable and could be disastrous to either qualifying for the playoffs or advancing when they do qualify. Groin injuries are slow to heal and the only remedy is rest, so it is fortunate the Blues have Brian Elliott, fresh from a conditioning assignment in Peoria, where he played shutout hockey for five of six periods and stopped 53 of 56 shots against (.946 save percentage). Elliott's play in Minnesota last Monday was a major reason why the Wild failed to score on five power plays as he stopped 19 of 20 shots against, including all 14 in the third period. Those who advocated trading Elliott during the trade deadline madness now realize just how astute Armstrong is and why he is the General Manager and they are not. 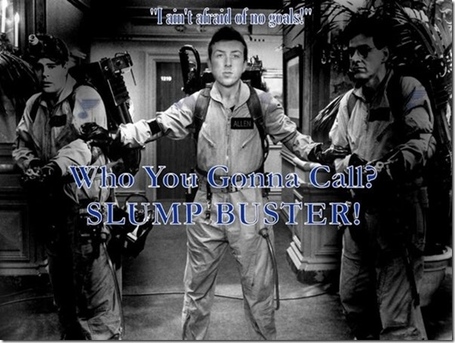 Blues' management is also very happy to have rookie goaltender Jake Allen, dubbed "The Slump-buster" by his Peoria teammates, back in St. Louis. Allen was called up to Phoenix on March 7 after the Blues were mentally destroyed in Los Angeles after coughing up a three goal lead in a sloppy, demoralizing horror show. The Kings scored five unanswered goals, chasing Halak from the net in the 4-6 loss. Allen won his start in Phoenix, making 23 saves, many of the spectacular variety early in the third period as the Blues nursed a 4-2 lead. Two days later in San Jose, Allen stopped 22 shots against, leading the Blues to a thrilling come-from-behind overtime victory over the Sharks. After the Blues lost in Anaheim with Halak in goal, they returned home and defeated San Jose again, with Allen stopping 39 of 41 shots against in a 4-2 win, extending his personal winning streak. Two days later, he shut-out Phoenix stopping all 28 Coyote shots. Being an avid hunter, Allen shot down the Ducks in the next game, making 27 saves in another thrilling 2-1 overtime win. That would make five in a row for the calm, confident Allen, running his personal record to 8-1. His streak ended in a closely contested 2-3 loss in Vancouver. He would also lose at home to Edmonton the following week, allowing three goals on only seven shots. Nevertheless, the Blues have confidence in him and he will be an excellent back-up to Elliott in goal, or even take over as a capable number one if Elliott falters.

The addition of Bouwmeester and Leopold should make the St. Louis goalies' jobs a lot easier, too. The Blues lead the league in fewest shots against with 24.1 per game. That should improve with the addition of these two veteran defensemen, who have 51 and 50 blocked shots respectively. They join the Blues' leaders Alex Pietrangelo (72, ranked 19th in the league), Barret Jackman (65) and Roman Polak (52). Kris Russell is right up there with 51 and Kevin Shattenkirk isn't far behind with 45. Ian Cole has 22 blocked shots in 15 games. Among the forwards, center David Backes is credited with 30 and winger T.J. Oshie has 24 blocked shots (in only 30 games). Bouwmeester and Leopold are also offensively capable, and the Blues' transition game should also improve. One major problem has been the inability of the Blues defense to clear the zone with any consistency and the addition of excellent passers, especially Bouwmeester, will help eliminate that inconsistency and keep the puck out of the defensive zone, further limiting shots against.

Bouwmeester brings his Ironman status to the Blues, as well, having appeared in 621 straight NHL games. And the 29 year old has averaged over 25 minutes per game this year with Calgary, making him a most attractive addition to the Blues defense corps. Under contract for one more year (at a cap hit of $6.6 M), Bouwmeester automatically becomes the Blues highest paid player. Drafted in the first round (#3) by Florida in 2002 (behind scoring star Rick Nash and goaltender Kari Lehtonen), Bouwmeester has played a total of 750 regular season games for the Panthers and Calgary, where he was traded in 2009, ironically for Jordan Leopold. Surprisingly, he has not appeared in a single post-season playoff game (yet), including his junior career with the Medicine Hat Tigers.

Including tonight's contest at Chicago, the Blues only have 14 remaining games. Five of the next six are on the road and seven of the last eight are at the friendly confines of the TradeStocks Center, including a home-and-home with the lowly Colorado Avalanche. If the new-and-improved Blues can take advantage of home-ice and dominate those games, they will be primed and ready to make some noise in the playoffs and work towards making this truly a season to remember.