The first period was ok, but the second period was a study in standing about until the very last seconds.

These guys really have to stop pulling games like tonight. Criticizing a win? Yes. Listen, the first period was an excellent road period. The second period was absolute shit on a shingle. Third? Much improved, but still problematic. I won't lie, to get outshot 36-22 isn't good.

But hey, welcome to the Blues, Jay Bouwmeester! Apologies for your -1 rating. I'm sure you're used to that, though.

The absolute highlight of the game, though, was Adam Cracknell. Recalled when T.J. Oshie wound up on the injured reserve, Cracknell and Chris Porter looked like the second coming of Hull and Oates out there. Chemistry from Peoria obviously bled over into tonight's game and invigorated the fourth line, who were easily the best line out there tonight. Cracknell's two goals and Porter's two assists were sharp and smart plays, proving yet again that it's the most unlikely players to buy in. Maybe though it's just a matter of the players who haven't been lollygagging about all season. That could be part of it too.

David Backes scored his first goal in fifteen games tonight, reminding fans that he exists. I love Backes, I do, but he has just been a non-factor as of late. It's no coincidence that when he places his large frame in the crease and fights for a puck, he can get one into the net. If he's not there, Bouwmeester's shot doesn't stand a chance of being dangerous. With Backes there, it's an assist.

The Blues are now in 8th place for the night, and tomorrow's game against the Blue Jackets is a huge one. Win, and the Blues are a few more points ahead with games in hand. Lose, and it's even more of an uphill climb. The end of the season sucks when you've forced yourselves to be a bubble team. More consistent play like fans saw in the first and third periods would be nice for the remainder of the year. When they're consistent, they're a playoff team. When they're inconsistent the best that they can manage is consistently frustrating.

If you missed the shootout, here's the recap. I abhor shootouts, but that one was actually kind of fun, and not just because the Blues won -- though that helped. 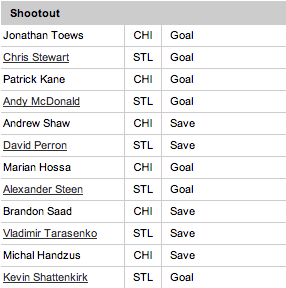