The Blues weren't exactly an offensive powerhouse tonight, but they plugged away enough to pull out an important win against the Columbus Blue Jackets.

Ok, sure, the Blues only managed 19 shots on goal tonight, and sure, the Blue Jackets had 27. But you know what? Shots don't win games. Goals win games, and the Blues potted three of them to hop three points ahead of the Columbus Blue Jackets and up to seventh place in the Western Conference.

It's hard to summarize a game like tonight's, because there weren't a lot of tremendous mind blowing plays... unless you count Jake Allen, who had some outstanding saves. Witness this save on Mark Letestu:

Talk about closing the door. Saves like that give your team confidence, and a confident team scores when they need to. Chris Stewart opened the scoring backhanding the puck past Bobrovsky.

Of course, it wouldn't be a Blues game without a deflating goal, this time courtesy of Artim Anisimov, but captain David Backes wouldn't think of letting that silence the Scottrade crowd for long. Heck, nine seconds later, Backes scored his fifth of the season.

This was the kind of game we want from the Blues and a lot of it we can thank our newest new guy, Jay Bouwmeester, for. Ghostmeester was not in the building tonight, as he assisted on both Chris Stewart's goal and Patrick Berglund's empty netter. 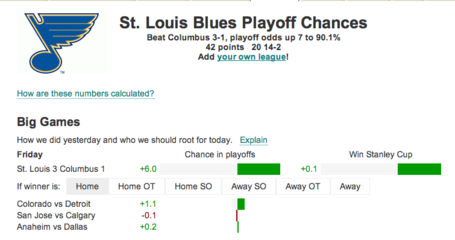 Sleep well, Blues fans. We're in firm grasp of playoffs at least until Sunday, when the Blues face Detroit for the last time this season.

Blue Jackets At Blues GameDay Storystream: This One Actually Matters