Blues 2013 Unrestricted Free Agents: Re-Sign Or Free Up The Cash?

The Blues have quite a few guys coming up for unrestricted free agency, and quite a few RFAs that need qualifying offers. What's a front office to do?

Share All sharing options for: Blues 2013 Unrestricted Free Agents: Re-Sign Or Free Up The Cash?

This past season, the Blues showed you can have regular season success with a low payroll - a reaffirmation of what they proved the previous season. Having the second-lowest payroll in the league ($52,185,361 according to CapGeek.com) leads to having the second most money to spend in the off-season on free-agents, right? Not for the Blues. They'll do what they've always done - stand pat with most of what they have, add a few quality pieces, and try to groom their core players for more success in the next season.

The trick this year is that several of those core players are up for new deals. Restricted free agents include Chris Stewart, Patrik Berglund, Evgeny Grachev, Alex Pietrangelo, Kris Russell, Ian Cole, Kevin Shattenkirk, Jake Allen, and a slew of AHL players.

Obviously, the focus there is on re-upping Pietrangelo, Shattenkirk, and Berglund - and they'll get paid. Stewart fought for a decent payday all season, but his playoff performance was beyond disappointing. Taking that small sample size out of consideration, he'll probably also get paid well.

I'll do a post later on the pros and cons of qualifying offers for these guys,but here I wanted to specifically focus on a few UFAs. The highest paid guys up for free agency are Andy McDonald, Jamie Langenbrunner, and Jordan Leopold. 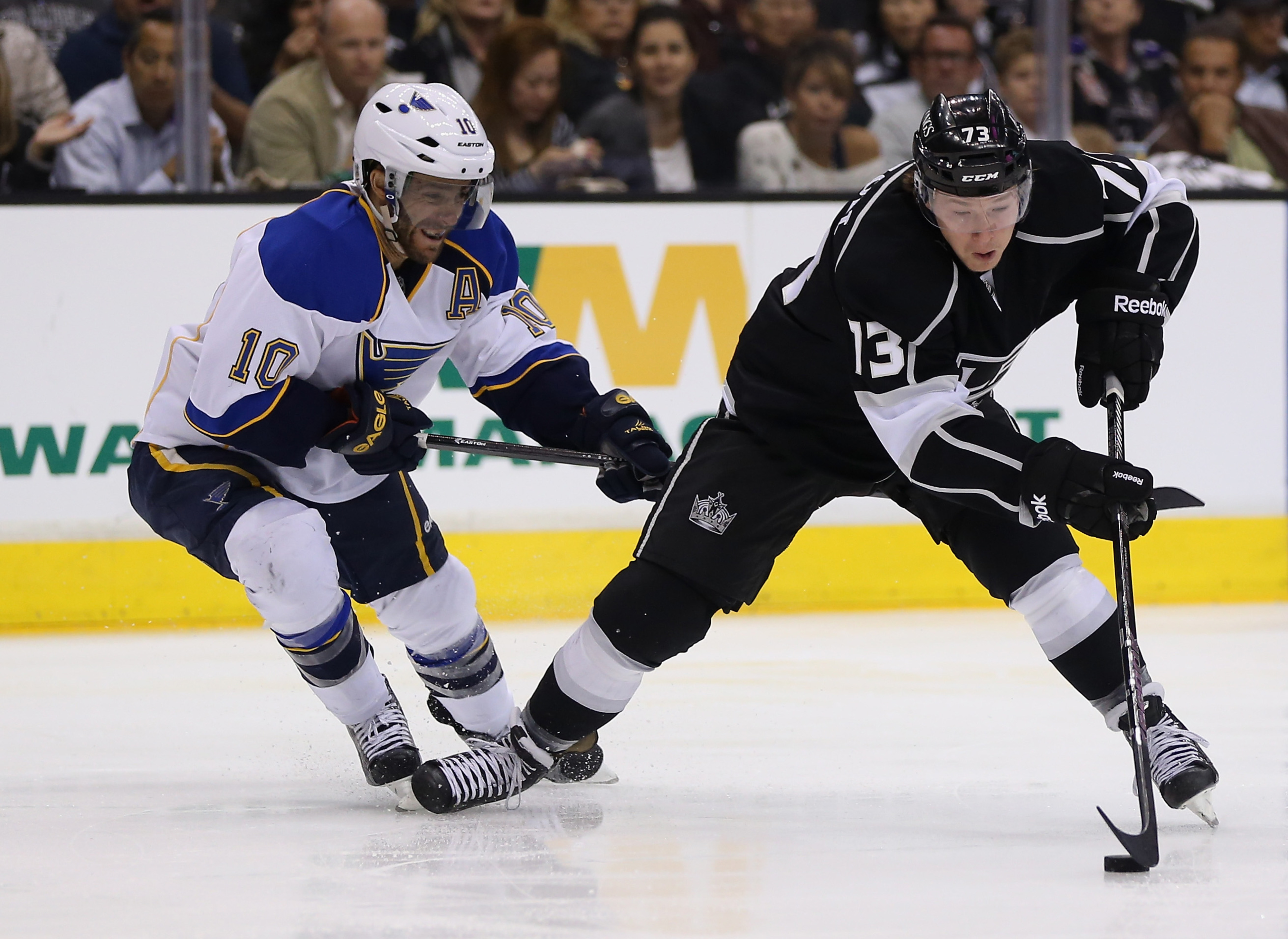 Andy McDonald is a prime candidate to not return to the Blues next season.

The pending UFA got paid $4,700,000 this past season, as well as the season before that. Prior to that, McDonald was paid $5,200,000, a sizable payraise from his $3,333,333 a year deal. McDonald has been the Blues' li'l waterbug, making space where none exists and zipping to the front of the net with aplomb. He's scored 90 goals in 294 games, but as of late he's been very prone to injury, especially concussions. He only netted seven goals this year in 37 games and was invisible in the Blues six-game series loss to the Kings. This is in marked contrast to the year before, where McDonald had five goals and five assists in nine playoff games; again, though, when faced with a highly physical Kings team, McDonald's output dropped off.

McDonald is obviously in some sort of decline, though whether it's due to age (he's 35) or injury or both. The question is this: is he worth re-signing? The Blues need to save money for their pending RFAs, and dumping a huge salary like McDonald's is a big step towards that. Could the Blues sign him for a paycut? Absolutely. Would he still be a very useful player to have? Absolutely. However, with Dimitrj Jaskin coming up and Jaden Schwartz along with Vladimir Tarasenko presumably taking on a bigger role, having McDonald on the team isn't a necessity like it was in years past.

Langenbrunner missed nearly all of the 2013 season, whether benched or out thanks to an injured hip. His salary was an affordable $1.5 million, but for someone who is 37 and who now has a big question mark over his head, is that a worthwhile investment for the team? 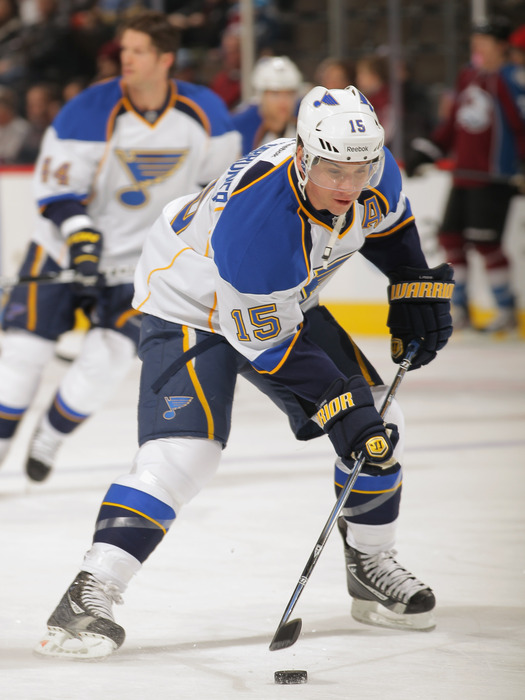 Chances are good that Langs won't return to the team either.

The upshot of Langenbrunner (and Scott Nichol, who is a UFA as well) is that he brings a veteran voice to the locker room that was very obviously missed during long stretches this season and during the playoffs. Would the Blues have had as many issues with players doing their own thing had Langs been there to tell them to get over it? He traveled with the team toward the end of the season and in the playoffs, and I'll go out on a limb here and say that it was done to give him a chance to help work out some issues.

I'll also go out on a limb here and say that no team will sign him next year, much like his compatriot and soon to be fellow UFA Jason Arnott. I appreciate what Langebrunner brought to the team, but I think it might be time for him to consider retirement. 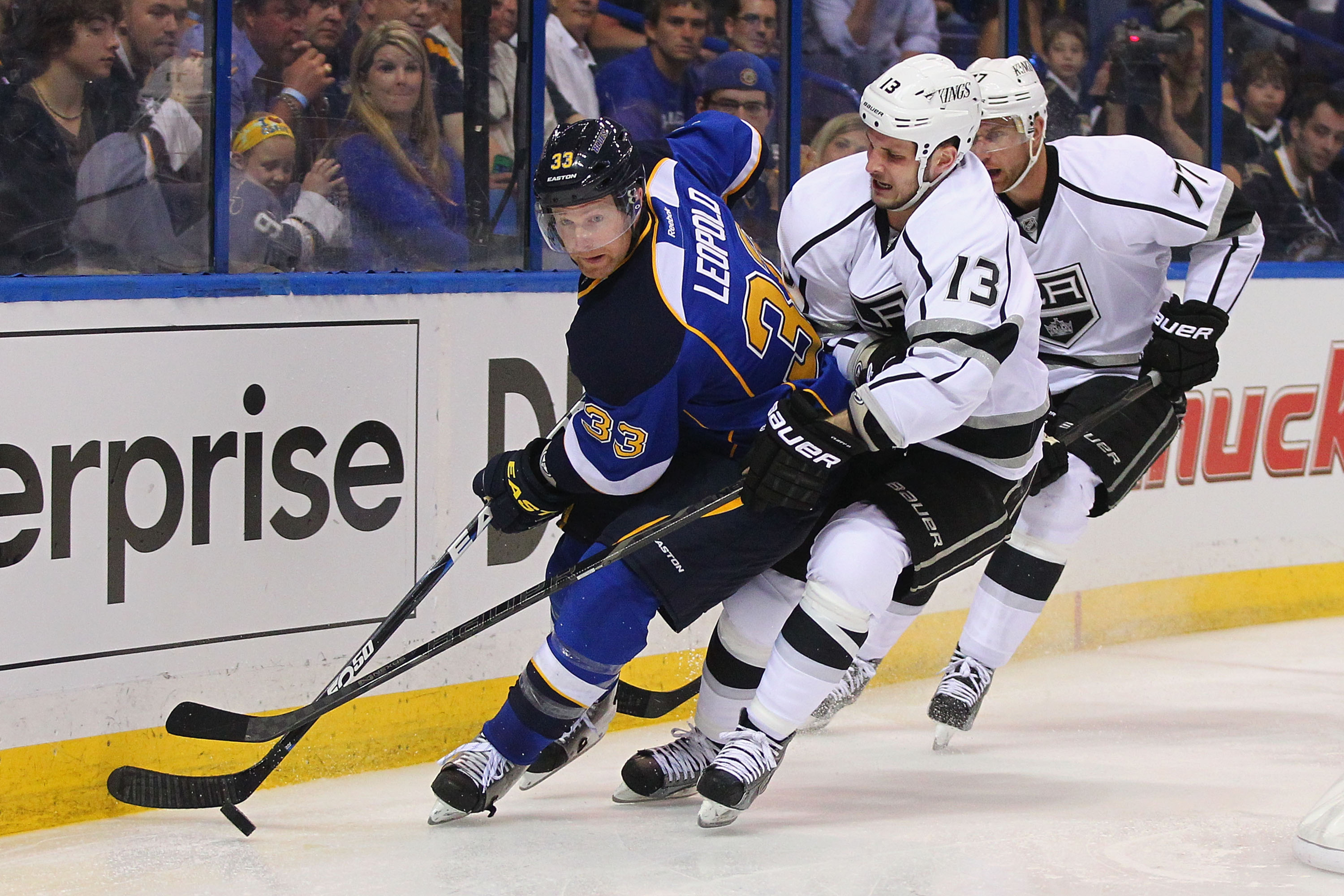 If there's a UFA to return, Leopold is probably it.

I think it's safe to say that no one would be terribly crushed if Doug Armstrong made a move to sign Leopold to an extension over the summer. He's not the only late-season defensive upgrade that the Blues made - Jay Bouwmeester helped calm things down as well - but having someone of his ability paired with Kevin Shattenkirk proves to be a great mentoring situation for the young defenseman. It also allowed Barret Jackman to move down with Roman Polak, which turned the third defensive pairing into a shut-down duo that closed out the season strongly (Polak in the playoffs, especially game six, was a different matter).

if the Blues resign one UFA, then Leopold needs to be it. Nichol is expendable, Langenbrunner's career may well be over, and McDonald is, unfortunately, expendable.