The Other Los Angeles Kings Eulogy

The eulogy at Puck Daddy isn't the only one that exists.

Share All sharing options for: The Other Los Angeles Kings Eulogy

My name comes first on the Los Angeles Kings eulogy at Puck Daddy, but I do want to make a disclaimer that the only thing that I did to it was read it. That was all our fearless leader, Brad. I was very unhappy with mine, and I'm so thankful that Brad was there to make a joke about Dame Judi Dench that I couldn't.

Like Brad mentioned in the eulogy, our only other option was a seance. That was the one that I wrote. I didn't like it, but hell, maybe some of you guys will.

It is a dark, muggy, and smoggy LA night. The Staples Center is quiet now, with only a table where center ice should be. The lights are all off, and there is nothing more than the glow of a few carefully placed candles to illuminate the faces of Matthew Perry, Retta, Tom Cruise, Alyssa Milano, Justin Bieber, and David Beckham. There is a medium at the head of the table, wearing a turban. He looks like Carnac the Magnificent. 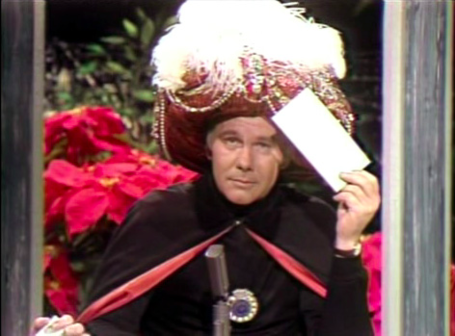 "We’re all gathered here tonight to figure out what happened to the defending Stanley Cup Champion LA Kings."

Carnac sniffs, as that’s the last time he’ll be able to use that phrase for the time being. Heaven only knows it hasn’t been used that much.

"They left us far, far too soon, at the hands of the Chicago Blackhawks. Who would have ever expected Jonathan Toews to out-captain someone with so much leadership in Dustin Brown. In the battle of the disconcerting facial expressions, I believe everyone here thought that Brown would have the upper one."

Everyone nods sagely, if not with a little bit of paranoia. The lockers haven’t been cleaned out yet, and Brown could be anywhere, knee extended, elbows waiting.

"What the hell is that?" asks Retta. "Can we not shut that thing up?"

"No," explains Beckam. "That’s Eric Cartman, the Kings’ spirit animal. He follows them wherever they go, cheering them on and making opponents want to drown themselves in KFC gravy." 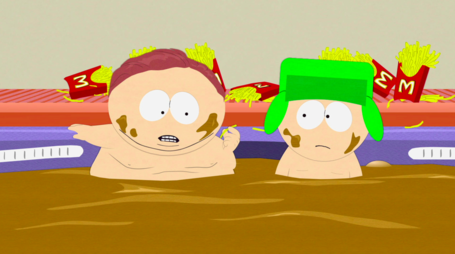 "So," Carnac continues, "let’s all join hands and see if we can contact - "

"No, not your show. It probably hung around half a season longer than it should have. Let’s all join hands and see if we can contact our dear departed Kings."

Suddenly, the candles are blown out with a smell not unlike toasted ravioli from a gentleman’s club all you can eat buffet. There’s a quiet moaning sound that’s ghostly, ethereal.

"Ugggghhh, Roman. Stop farting in my helmet. The season’s over, dude."

The folks around the table are confused and grossed out.

"What have we contacted?" shouts Carnac. "Who are you? Where are the Kings?"

"We’re the St. Louis Blues, bro. The Kings killed us off, and we’ve been waiting to welcome them to the Great Offseason Beyond. I mean, they’re our bros, bro. 1967! Wooooooo!"

"Teej, quiet," Blues captain David Backes says, as the spirits of rescued pit bulls bark in the background. "Listen, we’re really sorry to see the Kings go like that to the Blackhawks. I know that there was a lot of bad blood between us during the playoffs, but the enemy of my enemy is my friend. Now we all have to listen to chatter about an "all Original Six!" Stanley Cup Final like it means something more than merchandise sales and ratings, plus the world has to deal with another potential Patrick Kane celebration bender. It’s scary when he goes out drinking. It’s just funny when Dustin does it. 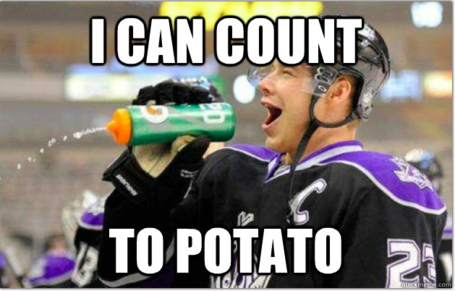 I mean, come on. That’s Patty after at least ten shots."

"And hey! Mad respect for Jonathan Quick. Who would have thought that he could kick rebounds half of the way down Sunset Boulevard? And then you can SHOOT THOSE REBOUNDS INTO THE NET? What kind of thing is that?"

"Teej," Backes says, "that’s what you’re supposed to do. That’s how you win games. The Blackhawks solved Quick. They made him mortal. Getting pulled in game two? That sound you heard during that game was every Blues and Sharks fan sighing in disgust."

"But hey! Your team has some pretty great players, though. Dustin Penner will always be that guy who ate pancakes regardless of what he has done on the ice. He’s gonna be 80 and he’ll have a fan yelling at him during Kings fans events ‘HEY! OLD PANCAKE DUDE!’ It must be terrible to never be able to get past that one joke about you. Hey, remember that time when someone voted for me as mayor? Good times! Or when I had my hair frosted? Or..."

"Slava Voynov, wow. He must really want to see what Jeff Carter and Mike Richards are talking about when they say Philly’s got hot chicks, because the way that he played he’s probably going to be offer sheeted by Paul Holmgren within a week."

"Hey!" It’s Alex Pietrangelo. "Can Holmgren offer sheet me? Because he keeps calling my phone and he leaves creepy text messages like "my precious.’ and ‘do you like cheesesteaks?’ That’s not cool, is it?" 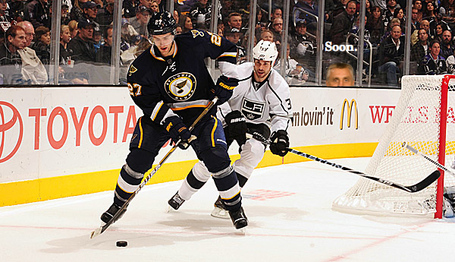 "Yeah, I got some of those too," Kevin Shattenkirk shouts from the beyond. "It’s freaking me out."

"Anyway," Backes continues, "you have nothing to be embarrassed of. I’m sure Anze Kopitar will go to his Marty Feldman conventions this summer just bragging on his face-off percentage this post-season."

"I feel bad for all of the ladies who will have a hard time resisting Jeff Carter’s rugged mouth-scars and stories of how big mean Duncan Keith tried to kill him. I wish I had rugged mouth scars to help get the ladies."

"Go talk to Walt, Teej. Anyway, we wanted to welcome the Kings into the off-season, which is why we crashed your seance. It seems that they’re not ready to go yet, but that’s ok. It takes a little while to adjust to the thought of being eliminated."

"So, no hard feelings?" asks Cruise.

"Nahh. Once they work their way through the off-season’s waiting room, we’ll be here to say hi. Losing happens to every team once in a while. Golf, like death, is the great equalizer. Tell Mike, Dustin, and everyone we’ll see them on the links."

"Yeah! Tell their coach Goonies never say die! He knows what I’m talking about," adds Oshie, as the lights come back up.

"What was that?" asks coach Darryl Sutter, munching on a Baby Ruth, as he comes out of the tunnel towards the seance table. At least, everyone assumes that’s what he asked. No one can really understand him anyway, which probably explains why Davis Payne had a crack at running the Kings’ power play.

"Just the Blues," replies Carnac. "They said ‘’wait until next year.’ I think they know what they’re talking about."