A snapshot comparison between Perron and Paajarvi.

In my mind it wasn't a matter of "if", but rather, "when" the St. Louis Blues would make a trade during the offseason. And after a relatively solid UFA opening day last Friday, the other shoe dropped this week when the Blues traded David Perron to the Edmonton Oilers for Magnus Paajarvi and a draft pick.

After the trade there were some sources that were saying the analytics staff for the Oilers were impressed with Perron, but left it at that. Not sure what they were looking at or how they were interpreting it. If you haven't already, you should go take a look at my David Perron post from this past season. The tl;dr version: After returning to the line up after missing most of the 2010-2011 season with a concussion, Perron had a really good 2011-2012 season and reverted back to "normal" David Perron last season. Except he had a lot more penalty minutes than he had previously.

But to the question at hand, how does the loss of Perron compare to the gain of Paajarvi?

First, let's take a look at the player usage chart for the Oilers and Blues from last season. I highlighted Perron and Paajarvi on the chart. 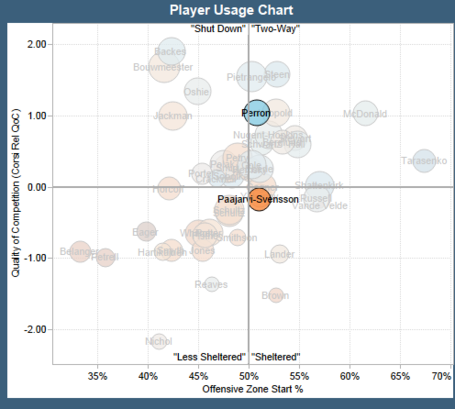 As you can see, Perron saw more time against tough competition, but most of his starts were in the offensive zone. He ended up with possession numbers that were in the positive. Conversely, Paajarvi fell just into the sheltered area of the chart which means, he started mostly in the offensive zone and did not have to face as tough of competition as Perron did. Paajarvi ended up with possession numbers in the negative. Which isn't necessarily a good thing, but I'm not going to judge him based solely on that one stat.

Why is three in quotation marks? Because of Perron's missed season. The year he went out with a concussion, he had only played 10 games. Even when you try to compensate by using the per-60-minutes-of-ice-time stats, it still creates a deceptive spike in his trend line by season. So I removed that season for Perron from all these charts and combined Perron's previous season (2009-2010) with Paajarvi's first season (2010-2011). Also keep in mind, that Perron is in his 6th season in the NHL while Paajarvi has only played 3 seasons.

This is just a snapshot comparing the past three full seasons for each player. Because Perron was one of the Blues' top point producers I wanted to chose stats that would highlight point production. All these stats come from Behind The Net and are per 60 minutes of ice time. The PDO at the bottom really is just about luck and a fun stat to include, but don't draw any serious conclusions from it.

What I find most interesting (and if I was to venture a guess probably what the Blues' front office found interesting) is how Perron's and Paajarvi's trend lines crossed or came close to crossing for 5 of these 6 metrics. I'm sure some of you have some thoughts about the secondary assist stat for Perron. What a spike! At first glance, it appears that the Blues traded a player with 6 years of experience for a player with 3 years, and plenty of growth ahead of him, that have essentially similar point production for their respective teams. However, as many of you have already noted, there is a cost difference and the Blues did get a pick out of the deal.

I can't emphasize enough that this is just a snapshot. It is only THREE seasons. I am not making any predictions about how Paajarvi will play for the Blues, nor should you look at Perron's trend line and think that Perron's performance is declining. The Blues traded Perron for a younger player, that could possibly provide the same level of points and got some cap space and a pick out of it. Seems like a win-win for the Blues to me.