A Question For "Game Time" Readers

How would you like to see prospect information displayed here on the "Game Time" site? Let us know via the poll below...

Share All sharing options for: A Question For "Game Time" Readers

I am using the enormous amount of free time I have this summer (ha!) here at Prospect HQ West to create a series of files containing statistical information on all of the Blues' current prospects.

My question to you, fellow Game Timers, is this: In what way would you like to see this information presented here on the site?

One way would be to have a single long post containing a data panel on each prospect, a data panel that looks like this:

A second way would be to have a series of posts featuring data panels for each prospect, like the one illustrated above. With the additions of four new prospects via the recent draft, and the deletion of prospects like Philip McRae (bound for Europe), there are currently 31 prospects on the Blues' Reserve List, so four posts with eight panels each (the last post, of course, would have seven panels).

A third way would be to create a single post with a table listing each of the prospects, and have each prospect's name be a link to a Gallery entry that looks like this: 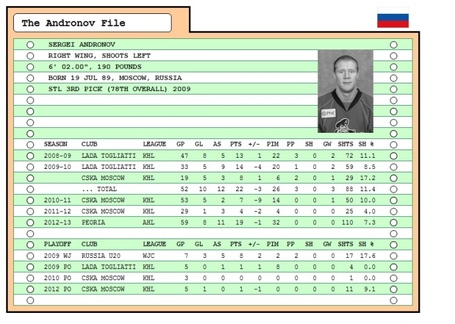 So, readers, what do you think? Vote in the poll below, and I will show you the Blues' current Reserve List in whatever way the majority of you want to see it presented. Thanks, and LGB !!!