I first met John Nicolay back in 2000, when I first moved to St. Louis and started spending time hanging around down at the Blues home games. John was a seasoned veteran of hawking hockey papers by then, having been the head vendor for Game Night Revue for over six years at that point. I found him to be charming, witty and rough around the edges in an endearing way.

When I started Game Time and asked John to be the head vendor for my paper, he excitedly accepted. Over the last seven years I found out that not only was he every bit as charming and witty and rough around the edges as I'd thought, but he also had a fierce loyalty to his family, friends and anyone associated with the Game Time paper.

His mother-bear protectiveness might have been his greatest quality, but it wouldn't be in first place by much.

John was, simply, fun. Everyone who spent time with him uses that one little word to describe his big personality within two sentences. Whether it be his long list of street corner one liners while selling the paper (Hey, look, it's the Pretty Girls Club!), or his stories that sometimes seemed like they might never go anywhere but always took you for a great ride, or his tales of intricate bartering (So, this guy at the meat department hooks me up if I give him a couple Game Times and then I can take that meat over to the....); John was fun.

John's longtime partner, Joann, told me this morning that, "I got six years of John time." That's probably the way that most of us will judge our relationships with John. How much John Time did you get? Was it a couple minutes before every Blues home game? Did you get to a couple hours with him at his local watering hole every couple weeks? (You know the one - where he can take the back alleys all the way home to avoid any "misunderstandings with the law.")

No matter how much John Time you've banked over the years, it surely was not enough.

On the corner of 14th and Clark, no matter the weather, no matter the time of day, no matter how sales were going, John was among his people. Be it a homeless guy trying to get some change, the police captain on duty, the evangelist yelling at the passersby or Game Time readers ranging from all manner of self-proclaimed degenerates to professionals, kids and the elderly, St. Louis celebrities or notorious figures, John was a constant positive presence. He was quick to tell you that he was comfortable with kings and paupers alike. He was always ready to help out a broke fan with a complimentary copy of the paper just as he understood the need to flip a freebie to someone who could easily afford one if he thought it might "grease the wheels of commerce."

John loved working the Game Time sales job, but I always suspected that it was more for the people interaction than it was for the pay. He had a special affinity for Game Time, annually mentioning that the paper shared his birthday. He loved the jokes in the paper, the most crass ones usually assimilated into his routine and morphed into those trademark one-liners he could fire off when needed.

I snapped a picture of John a couple years ago, simply testing out my new phone. What I luckily managed to capture is, to me, a quintessential photo of the man: comfortable and relaxed, enjoying a couple peanuts (probably acquired via barter of a GT paper). John always seemed that way to me: relaxed, comfortable with himself and his surroundings. Confident in what he was doing and, as ever, having fun in the process.

I'm recalling my best John Time moments today and will continue to do so for a long time to come. That northeast corner of 14th and Clark will always be John's corner to me and no matter who stands there from now on, John will always be the King of All Vendors. 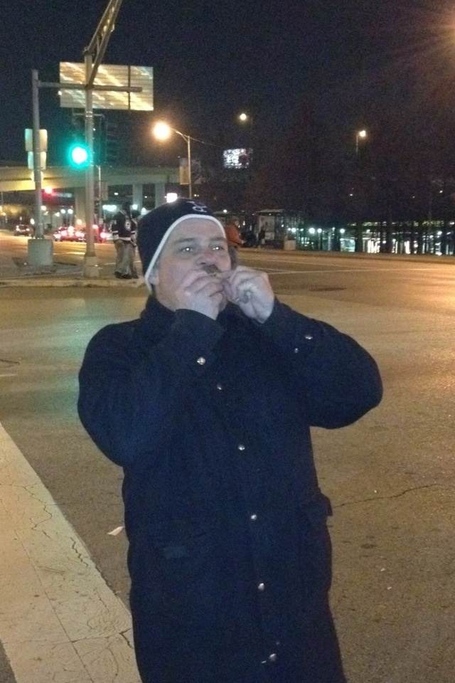 John Nicolay, King of All Vendors.