Blues Finally Spending Close To The Cap - How Much Of An Impact Will It Make?

Blues fans have long opined that the team often seems to be spending to the floor. Now that the team's spending closer to the cap, will fans be happy and will the team succeed?

Share All sharing options for: Blues Finally Spending Close To The Cap - How Much Of An Impact Will It Make?

Well, this is odd. After years of expecting the Blues to spend to the salary floor, or just a bit above it, so far this off-season they're at the middle of the pack in spending: 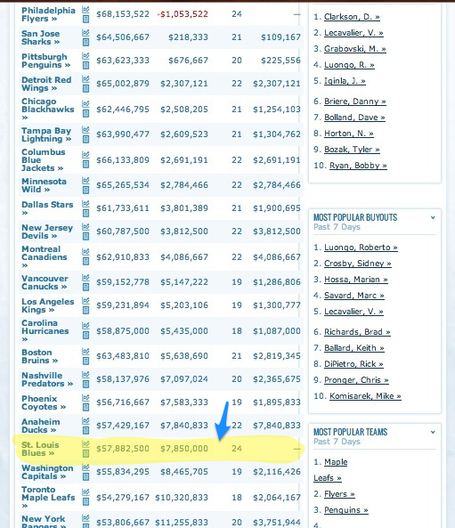 The worst part about the Blues spending like this is that they have $7.85 million with which to sign Alex Pietrangelo, Chris Stewart, and Jake Allen. This is going to take some creativity from Doug Armstrong.

Ok, maybe not so much creativity as magic. However he does it, if Armstrong gets the Blues under the cap with the roster that they currently have, he's a miracle worker.

The reason that the Blues aren't hamstringed is thanks to the fact that the players that they've signed - Keith Aucoin, Maxim Lapierre, and Derek Roy - have all come very reasonably priced. Yes, losing out on Stephen Weiss and Vincent Lacavalier sucked, but did anyone think that the Blues would sign them? The terms were too long: Weiss wound up with five years at $4.9 million a pop, and Vinny wound up with five years as well with a salary of $4.8 million a year. Those are pretty large contracts, especially Lacavalier's considering he's no spring chicken anymore. Toss in the fact that the Eastern Conference is both familiar to both of them and comes with a lot less travel, and you can feel ok with just giving the Blues props for hanging until the very end.

Did the Blues sign anyone earth shattering? No. Did they sign someone who fit in their "blue collar/works his ass off" mold? Yup - everything I have heard from Islanders fans is that Aucoin is a super hard worker who isn't afraid to get his nose dirty. That's the kind of guy this team signs. Lapierre? A good number of fans are unhappy about this, but he is an annoying agitator who can throw opponents off of their game.

Derek Roy is probably the signing that is causing the most division. As Jeff Gordon describes him:

He is a "pass-first" pivotman. The Blues are starved for this element. They deployed many big forwards and plenty of versatile two-way forwards last season, but they didn't have a natural set-up man at center.

Sounds good, although you and I both know that Backes is starting the year at center on the top line. Unless Perron gets bumped down to line number two - and he could very well be bumped down - he may not benefit from Roy setting him up. I do get the feeling that Vladimir Tarasenko will benefit very much, however. Roy has a chance to pad his assist numbers here if the wingers can manage to hit the broad side of a barn.

Yes, the Blues didn't sign that sniper that we've all been hoping for years that they'd sign. But look at it this way - they're better now than they were at the end of last year. Armstrong isn't done shoring the team up, but on paper it looks good. Now it's time for the players to realize that the onus is on them. The fans' tolerance for the perfunctory first or second round playoff exit is growing thin. I have a feeling that the team's patience finally is too.