In our fourth and final installment, Game Time's own Fearless Leader Hildymac, a former Atlanta season-ticket holder, gets one last chance to Thrash her ex-local team.

Share All sharing options for: HOW-TO HATE: The Winnipeg Jets

To reiterate my opening from last week, the criteria I tried to follow in looking for interviewees for this series was "If this team were eliminated from a playoff series tomorrow, who would I most want to see write their Puck Daddy eulogy*?" Following that line of thinking, there really isn't another choice at this point in time to roast the Winnipeg Jets than former Atlanta Thrasher season-ticket holder and our own Fearless Leader, Hildymac**.

Hell hath no fury like a hockey fan scorned.

And just to hit home the effect and to avoid confusion, I'll be referring to her in the interview as the former SBNation home of the Thrashers, Birdwatchers Anonymous (that okay, boss?). RIP BWA

*Another Gallagher/Brad Lee classic awaits you on the other side of that link.

**If you're not already following her on Twitter, what the fuck is wrong with you?

SLGT: Which current Jets player is the most deserving of our scorn, and why?

BWA: Ondrej Pavelec. He's a rebound machine who is amazingly inconsistent, who can't hydrate or eat breakfast and then passes out during the occasional game, and who was signed to a contract too large for his stats. He's been the ThrasherJets' GOALIE OF TOMORROW! since 2008. 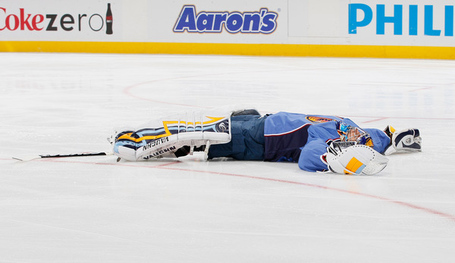 Inspires confidence, no? Perhaps with his newfound millions he can buy some protein shakes or something.

(I wouldn't be making fun of this if he wasn't ok - I was at that game and once we figured out what was going on, it scared the shit out of everyone.)

SLGT: What about the Jets past (including the Jets 1.0)? What's the most annoying moment in Jets history from your perspective?

BWA: Their existence. No, no, just kidding. I would say their move to Winnipeg, but that was expected and more depressing than annoying. After all, when a team is owned by eight people who only care about a mediocre basketball team, what do you expect? Think Bill Laurie times eight, and instead of trading Chris Pronger to Edmonton he gave the whole damn team to Canada.

The Kovalchuk trade? Same - it was like a semi in your lane on the highway coming right at you: obvious that something bad was going to happen.

The ThrasherJets' worst moment is the fact that Don Waddell included Pascal Dupuis in with Marian Hossa when Ray Shero requested Eric Perrin. "Oh, you want this average player? How about we give you the better player who is also a fan favorite! There you go." The trade in general was Waddell-riffic but that last part still sticks in the craw of a lot of people.

Wait, no. The most annoying moment was when the ownership canned Bob Hartley and then were too cheap to hire a real coach, so they just let Waddell stay behind the bench and flail about, which in several games, he actually did. How about you owners appoint Brad McCrimmon the coach LIKE YOU SHOULD HAVE?

No, I lied. The worst and most annoying thing about the ThrasherJets were the entitled 15 year olds with an Internet connection who piled on a team who relocated, while not realizing that their team had the exact same thing happen to them in 1996. If you're going to troll another team, how about you have the common sense to ask your parents if the same thing had ever happened to your city.

Nice job predicting the move to Canada would turn the franchise into the next Stanley Cup Champions. 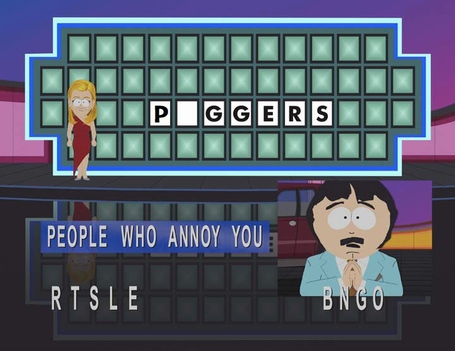 SLGT: Why is their style of play The Worst Thing To Ever Happen to Hockey?
BWA: Defeatist hockey is never fun, and for whatever reason this team stops playing when things get tough. I was actually really pleasantly surprised that this past season they played up until the bitter end instead of just saying "fuck it, we quit" halfway through December like they usually do. I give them a lot of credit for that.

SLGT: How about Winnipeg. What's the biggest reason that Winnipeg & Manitoba suck? Is it a fun place to take in a road game?

BWA: It's tundra that turns into the world's biggest mosquito breeding ground during the month and a half of Summer that God allowed them. fun fact: The average winter temperature in Atlanta doesn't drop below 41 degrees (January). Winnipeg? It's zero for the same month. That's Fahrenheit.

I have friends who are Jets fans and they enjoy it The Peg. I would assume that the atmosphere in the MTS Centre is amazing because a) it's filled to the brim and b) they haven't suffered through eleven seasons of this franchise yet. Give them time. They'll turn into carbon copies of miserable Flames fans soon enough.

BWA: Depends. If it's the guys from Arctic Ice Hockey, they're fun drinking buddies. After all, their blog is basically a Canadian version of Birdwatchers Anonymous. It's part "OH GOD WHY DO YOU DO THIS TO US" and part "let's rationalize the pain with advanced stats."

I think that the entitled Peg fans would be extremely obnoxious to be drinking buddies. Any idiot who can justify Pavelec's contract and say that he "just needs to rest more and then he'll be a legit starter!" would only progressively get dumber as the beers piled up.

SLGT: Lastly, what would you say is the single biggest reason to hate the Winnipeg Jets?

BWA: The NHL poached a savable franchise just to shut up a group of Canadians whose team shouldn't've moved to begin with. I can't hate them, but I can sure as hell hate Gary Bettman, Bill Daly, and every single person who took glee in the fact that the Thrashers relocated.

Part I: J.J. from Kansas tears the Avs a new one.

Part III: Rudy Kelly fills you in on "The Steve Buscemi of States," Minnesota and the Wild.