First The Hockey News picks the Blues to win it all, and now EA's simulation has the Blues taking care of the Blackhawks and Penguins en route to the Stanley Cup.

Perhaps defense does win Cups. Maybe, just maybe, the Blues' stellar defensive corps can shut down the league's best and brightest offences. Perhaps this is all a video game and we're reading way too much into this whole thing.

EA Sports NHL 14 annual simulation has been run, and it seems that the Blues will be taking care of two of the league's bad boys while winning it all. The Blues will defeat the Presidents Trophy winning Chicago Blackhawks in the Conference Finals before beating the Pittsburgh Penguins four games to two in the Stanley Cup Finals. Alex Pietrangelo, Jay Bouwmeester, Kevin Shattenkirk, and company will solve not just Patrick Kane and Jonathan Toews, but will also stonewall Evgeny Malkin and Sidney Crosby. Alex Pietrangelo will win the Conn Smythe. From the official EA Press Release:

REDWOOD CITY, Calif., - September 26, 2013 – A simulation run by EA SPORTS™ NHL® 14 predicts that Alex Pietrangelo will lead the St. Louis Blues to their first ever Stanley Cup® Championship in the team’s 47-year history. The Blues will finish second in the Central Division and third overall in the Western Conference with 99 points. Pietrangelo will be awarded the Conn Smythe Trophy as the Blues upset Sidney Crosby and the Pittsburgh Penguins to take the series 4-2 in the 2014 Stanley Cup Final.

For a full recap of the NHL 14 season simulation results reference the NHL 14 Season Infographic.

"The St. Louis Blues are the personification of NHL 14," Sean Ramjagsingh, NHL 14 Producer. "They’re tough, fast and have one of the deepest lineups in the League, making them a favourite to finish on top this season."

The Blues do have an extremely deep line-up, which I'm sure that the simulation took into consideration. Injuries happen, often to a team's best players, in NHL 14. At least the Blues have some quality guys to call up when their roster regulars go down. 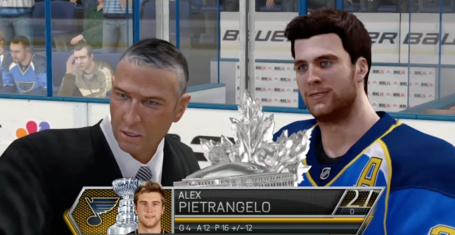 It would be nice if the Blues would sim their way to a Stanley Cup in real life instead of us simming the Blues to the Cup in NHL 14. The big question remains, though: is this a jinx? We'll just have to wait and see.