How Do The 1994 Blues Compare With The Team Today?

Much has changed in nearly 20 years in the sport of hockey, but for those of us raised in the early 90s, fond memories remain of those Blues squads. How does today's squad match up to the players of NHL 94?

Share All sharing options for: How Do The 1994 Blues Compare With The Team Today?

NHL 94 is commonly held to be the pinnacle of hockey video games, if not sports games in general. Praised for realism (or as much as you can get on a 16 bit system) and general ease of play, the EA Sports title is beloved. What other game can you think of where people still play on-line leagues, sometimes with modern line-ups and modern teams?

NHL 94 is also known for inexplicably making the 1993-1994 Chicago Blackhawks the greatest team in the history of ever. It wasn't just Jeremy Roenick and Ed Belfour that had insanely high ratings. Witness: 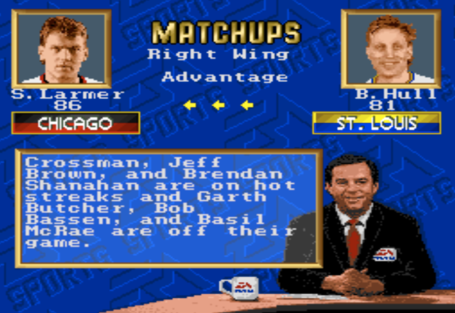 In what world does this happen? NHL 94's, apparently.

EA Sports, with the 20th anniversary of its most popular NHL title coinciding with the release of NHL 14, decided to play to our nostalgia and insert the NHL 94 Anniversary Mode for fun. It has simpler controls, throwback uniforms (though I maintain that the Blues' are incorrect - where's the red?), and the arena specific organ music that includes "The Blues Go Marching In." Unfortunately, due to NHLPA fees and whatnot, it doesn't include the 1993-1994 lineup.

So, you're playing that season with the 2013-2014 Blues. How does that compare? I would say favorably. The line-up from 20 years ago has beloved players such as Brett Hull, Kelly Chase, Brendan Shanahan, Craig Janney, and Curtis Joseph. It also managed to finish fourth in the Central Division (RIP Norris) and got swept out of the playoffs by the Dallas Stars in the first round.

It's the classic case of the underachieving team. Hull netted 57 goals and 40 assists, while Shanahan had 52 goals and 50 assists. Aside from Craig Janney's 16 goals, the rest of the scoring was atrocious that year. Now? The Blues score by committee and rely on an air-tight defense. Joseph that season saw 2382 shots fired off at him. Imagine CuJo behind the Blues' current defense and what his numbers would be.

The Blues don't have a Brett Hull or a Brendan Shanahan on the ice anymore, but they're far more intimidating now. They wear teams down and clamp off their hopes of offense with goaltending and defense that are one of the best in the league. They've always been a hard working team - past or present - but now? Now they have the stuff to take them to playoff success.

Of course, you could always close your eyes and imagine Brett Hull on today's team. Brett Hull of 1993-1994, that is. Today's Hullie is better suited to the front office, although if the playoff situation gets hairy he's there if we need him.