Share All sharing options for: We Can't Dance: Blues at Vancouver Canucks Preview

In this little writing gig I have, the ones I dread the most are the back-to-back weeknights in Western Canada. Luckily, I have a Victory Monster to keep me going -

Well, we have finally reached the end of the Canadian road trip, with the last stop coming in British Columbia to duke it out with the Vancouver Canucks. Coming into this game, the Blues are finally first in the Central Division, leading the league in goals-per-game and goal differential. To say the least, confidence is riding high. Every single player on the roster has registered at least 1 point, even the goaltenders. And the really weird thing is - we still have room to improve. As good as things are right now, the team could be even better. The Blues were coasting towards the end of the Flames game, hopefully they can turn it on again tonight.

Contrast that with the current state of the Vancouver Canucks. First of all, they have yet to win this year - their last victory was 12/29, and since then they have lost 5 in a row. The 4 from this year are against Tampa Bay, Los Angeles, Anaheim, and Pittsburgh. Tonight they get St Louis, and then they get to play LA and Anaheim again. What a tough frickin' schedule, eh? Their last game, against Pittsburgh, was a particularly heartbreaking loss. They gave up 2 goals in the final 71 seconds of regulation to allow the Pens to tie it up (with Crosby getting the last one), and then end up losing to another Sidney Crosby score in the shootout. I can imagine the Canucks fans taking it all too hard.

While they once used to dine out on an easy division schedule, the realignment has exposed their declining fortunes. They still have the tools to be a dangerous team, but that window is starting to close for the Canucks. Even their coach is calling them "fragile". Once again, looking at the #fancystats graph for 5vs5 PDO, you can see that their recent downward turn is a correction back to that 100 break-even mark: 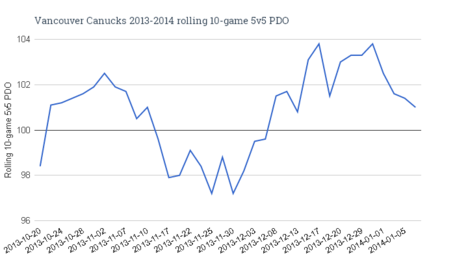 Now, part of their issues have been injuries. Canuck mainstays Alex Burrows (broken jaw) and Alexander Edler (Lower Body Injury) are on IR. Just as starting goaltender Roberto Luongo was coming back from injury, he got ran over by Dustin Brown, and is now Day-to-Day. It's pretty telling that they've called up their AHL goalie Joacim Erikkson to back up Eddie Lack in the meantime. Lack has already spent some time in Luongo's net, so he should be right at home: In 16 games played, he has a 7-3-3 record, and his 2.27 GAA /.920 SV% is right on par with Luongo's numbers.

As for scoring, it's no surprise that the Sedin twins lead the way. Overall points leader Henrik Sedin has only 9 goals, but 30 assists for 39 points. Brother Daniel Sedin has 38 with 13g, 25a. The goals leader is next, Team USA's Ryan Kesler (17g, 12a) with 29 points. Special teams might be a factor tonight; Vancouver has the best PK in the league at 89.1 percent. It looks like the Blues will need to get some goals during 5on5 time. Hopefully they can catch Lack when he's in too deep in his net, and pot a few goals.

Final Verse: Another late start tonight, as the opening faceoff is scheduled to happen at 9:00 PM St Louis time. The TV broadcast will be on FoxSports MW, and the radio call will be on KMOX 1120 AM. The GameDay Thread should drop shortly before the puck does. Until then, this is your pregame warmup. Gather here, gripe about the weather/traffic like Midwesterners do, mock The Wave that Canuck fans do, and get more chuckles at the expense of the Canucks...