I'm All-In; Or How I Learned to Stop Condescending & Love the Idea of Trading for Ryan Miller

The Blues still have other needs, maybe even bigger needs, but adding the USA Olympian and former Vezina Trophy-winner could solve a few of the teams most disturbing trends and turn them from contenders to favorites.

Share All sharing options for: I'm All-In; Or How I Learned to Stop Condescending & Love the Idea of Trading for Ryan Miller

During the third period of Saturday night's game against Chicago, the Blues were trailing the Blackhawks 5-3, and from the way they were playing seemed fortunate to be even that close. Things were frustrating - as any loss to the Fuckhawks would be - and it seemed like the doors to The Asylum were about to be flung open like Arkham in Batman Begins. So I preemptively tweeted:

Worst part is that this'll probably fuel the "Blues Should Trade for Ryan Miller" fire. That's almost as annoying as losing to the Hawks.

I got into a bit of a Twitter tift (a twift?) over the idea, at the time believing it to be unnecessary move that outsiders have been linking to the Blues for several months now just so they could write about it and get trade speculation hits.

Flash forward to last night. Like so many times before (or more accurately, 5 times before), the Blues found themselves being thoroughly outplayed by a California team, and in this case the LA Kings no less. For those of you still trying to catch on to the advanced statistics, Fenwick is any attempted shot that isn't blocked, whether they end up going wide, on goal, or in goal, and charting is about as good of an indicator of team performance as any statistic out there. With that in mind, here's how the first period looked from that perspective (thanks to Robb and Extra Skater.com):

#stlblues vs LAK 1st per possession chart (fenwick) LAK is leading in possession which is no surprise (unfortunately) pic.twitter.com/OfL5kTx8ds

The data suggests that Miller is about the same as Halak. Even if he were better, come playoff time it wouldn't matter.

To put it bluntly, the Blues played like shit in the first period. However, while knocking in a goal on the power play went a long way in helping calm those nerves, the Blues were still being out shot 13-6 and out Fenwick-ed 21-9. The difference was Brian Elliott's performance in goal. He was the only reason the Blues ended the first period not down by 2 or 3 goals, never mind winning 1-0.

Although the Kings controlled the Fenwick column for most of the rest of the night, Ells stood tall long enough for the Blues offense to get their sea-legs under them. The outcome was a rousing 5-0 win that post game talking heads on the radio called perhaps the most complete performance by the Blues this season, despite the #FancyStats not quite agreeing. And none of it would have been possible without a performance such as the one Brian Elliott, specifically in the first period.

We know that, because we've seen how the story goes without that kind of goalkeeping.

For whatever reason, the Blues have a tendency to come out flat in the first period. It's a very bad habit, one which hopefully Hitchcock can fix, but it's one which has plagued the Note throughout the season, long enough to consider it more than a small sample size. But seeing Elliott stand on his head last night, it occurred to me that as long as the Blues can expect that kind of goaltending performance night in and night out, that kind of team flaw - the most potentially damning flaw this roster can have - can be minimized, if not entirely neutralized.

As great of a backup/number 1B as Brian Elliott has been, we've seen enough of him the last few years to know that while he might be capable of nights like last night, you can't expect that every time from him. And although I consider myself a fan of Jaroslav Halak he's had his nights where he's come out of the locker room on just as poor a form as the team in front of him has been known to have. Halak is more than capable of getting hot and staying strong for periods of time like he did for the Habs in 2010, but those nights have come just often enough to make you question if tonight will be one of them. Even during his magical 2010 playoff run, people forget Jaro had a couple of shitted beds that led to Montreal giving up 7 goals and wondering if Carey Price might start the next game.

If the Blues have "One of Those Nights" in the first period, they need to be able to expect their goalie can withstand the pressure. Both Jaro and Ells are capable of doing so, but at this point, neither surprises you when an off night pops up. In other words, neither are That Guy.

I believe that Ryan Miller is That Guy.

Don't get me wrong, I still believe Halak is capable of leading the Blues through the playoffs. However, if the Blues continue to be at their most vulnerable to top competition during stretches of play with extended pressure in their defensive zone, consistency is needed. And while playing for a Buffalo Sabres team that some are considering maybe the worst NHL team in the last decade, Ryan Miller has not only kept them in games they've had no business being in, he's done so well that he may have won his US Olympic job back, and he's on the short list of Vezina Trophy candidates so far this year. Here's another Fenwick chart, this one is from Buffalo's game against the Capitals last Sunday. 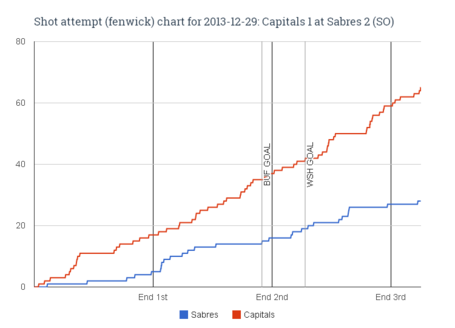 That first period is very similar to the Blues first last night, minus the Morrow goal, and just like Elliott did, he kept his team in a game they should have been down by at least a goal. Miller's final numbers saw him rack up 49 saves on 50 shots, finally winning in the shootout. The Caps more than doubled Buffalo's Fenwick events.

***EDIT: It occurred to me that my point might be more effectively illustrated by including a Fenwick chart from a game the Blues lost through a shitty first period, that perhaps having Ryan Miller might have avoided, or at least made a game out of it. Here's the Blues-Sharks game from November 29th - the Brent Burns hat trick game, where the Blues game up 4 first period goal. They did get their shit together to make it a one goal game in the third, but by then the energy was sapped from the comeback that there was none left to see it through. 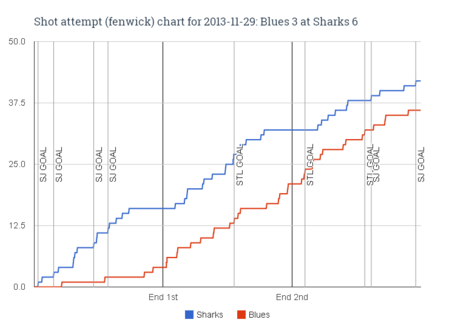 There are still kinks in the chain, I readily admit. Buffalo is looking to rebuild and Miller is really their only valuable asset, so unless he publicly asks to be traded they're rightfully going to milk him for all he's worth. If I'm Pat LaFontaine (or whoever is making the Sabres' decisions), I begin negotiations with Doug Armstrong by flipping a coin - heads, I ask for Vladimir Tarasenko, tails for Jaden Schwartz. Neither of those are parts I'd be willing to lose, but if Army is the miracle worker we all like to treat him as, I'm sure something can be worked out.

To me, Ryan Miller could be to the Blues what Marian Hossa was to the Hawks in 2009-2010 - the one piece to put the team over the top, by taking an area of the game that you're good at (in this case, keeping the puck out of the net) and making yourself the best at it. He'll also, as I said, go along way in neutralizing what's becoming the Blues biggest weakness by consistently keeping them in games until the offense can poke through.

The Blues are a very good team, and I do believe that they can win a Stanley Cup with Jaroslav Halak. But with Ryan Miller, they should win The Cup.