A look at tonight's opponents, Cal and Gary, and what we can expect

Share All sharing options for: ... But Seriously: Blues At Calgary Flames Preview

Once again, the St Louis Blues are the talk of the league, with the players posting great numbers and the team as a whole streaking through their competition. They've won 6 games in a row, and the last time they weren't victorious was .... OH YEAH... the 12/23 debacle that saw the Blues cough up a 2-goal lead in the third period, where Flames captain Mark Giordano scored the tying goal with 5 seconds left. Against all odds, the Flames would go on to win that one in a shootout.

This time around, the Blues have every reason to be more cautious, and more focused. On Tuesday, the game against Edmonton may have been tainted by Olympic distractions, but that cannot continue in tonight's match. There's no shortage of motivation to keep your focus on the task at hand; simply avenging that last OT Loss, for starters. Redemption for blowing a lead, which doesn't happen with this incarnation of the Blues, would be another. The real buzz in the air tonight, though, is the fact that the two points from a win tonight would FINALLY catch us up with the Chicago BlackHawks for the Central Division lead. The Hawks lost in regulation to the NY Rangers Wednesday night, so they remain only 2 points ahead of us. A win tonight, and we'll be tied with 67 points.

In the six games since their win over St Louis, the Flames have been shut out 4 times. Remember the graph for the Dallas game that showed the momentum that the Stars had, coming into that game? Here's that same measurement (from Extra Skater) for Calgary. Remember - it's expected that all teams should eventually even out at 100: 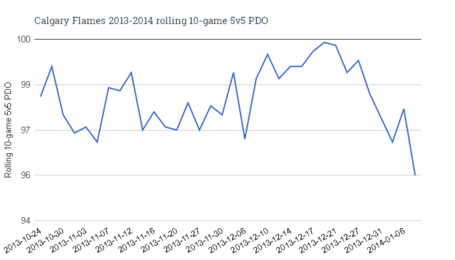 Right there - that's the opposite of momentum. That should correct itself soon, too, and bounce back upwards towards the break-even 100 mark. I'm in no hurry, though. Let's keep that trend going, at least for one more night.

If the Flames do rediscover their scoring touch, it'll probably be the familiar names leading the way. Former Red Wing Jiri Hudler leads the team with 35 points (12g, 23a), while goals leader Mike Cammalleri is second with 21 points overall (13g, 8a). Mark Giordano has 5 goals and 13 assists for 18 points, and youngster Sean Monahan has matched that total with 12 goals and 6 assists. After that, no single player has more than 6 goals or 16 points on the year.

The Calgary net has been largely a timeshare. In 19 games played, former Blues prospect Reto Berra has posted a 5-12-2 record, with 3.09 GAA and .898 save percentage. Karri Ramo has also played in 19 games, but his record is 7-7-3, and he has 2.76 GAA and .905 save percentage. As I write this Wednesday night, we're not sure who's starting for Calgary yet. Stay tuned here, I'm sure it'll be mentioned over the course of today.

Other names to watch for are former Blues Lee Stempniak and Kris Russell, and also St Louis native Chris Butler. This is the third and final meeting between these two teams. So, we can wish them well and much success: starting tomorrow.

Final Verse: We're still in Western Canada, so another late start. Opening faceoff is 8:00 PM St Louis time. The TV broadcast is on Fox Sports MW, and the radio call will be on KMOX 1120 AM. The GameDay Thread should drop just before the puck does. Until then, consider this your pregame warmup. Gather here, bask in the warmth of a balmy 36-degree forecast, lament the additional snow that's rumored to be on the way, and wax nostalgic about our visits to Calgary just last year:

Blues At Flames GameDay Storystream: Let's Not Have A Repeat Performance