Halak not only gets the shut out, but he earns an assist in his first game back as Blues smother the Flames 5-0 in Calgary.

Share All sharing options for: Recap: Blues Blow Out Flames

Halak returned in style with a shutout and an assist.  All he needed was an empty net goal and we could've called it a Halak Hat-trick.  When Halak wasn't busy working his magic in the blue paint, 5 different Blues players each scored a goal (2 of which were power play goals).

So let's get right to it with tonight's recap.

Halak's first save upon his return to the ice sheet.  I'm already in love.

Then about 4 minutes into the first, the Blues get their first power play of the evening after Stempniak interfered with Pietrangelo.  Apparently this was the warm-up power play for the Blues.  They struggled keeping the puck onside and for some reason they were lacking a man in front of the net most of the time.  But our old friend Dennis Wideman felt sorry for them and gave them another chance to get it right when he cross checked Magnus at 7:14 in the first.  Blues fail to score, but the power play looks much better.  Blues manage to cycle the puck and get some nice chances on net.  Blues back to even strength, but you wouldn't know it.  It still looks like they are on the power play as they continued to dominate in Calgary's zone.  Morrow wins a battle along the boards and slips the puck to Roy who finds Stewart set up in the slot and Stewart wastes no time.  Blues go up 1-0.

Calgary doesn't learn from that lesson and so Stewart just keeps hanging out in the slot (kind of like how my cat keeps hanging out in the kitchen after that one time she caught a mouse in there) looking for the puck to put in the back of the net.  And the Blues keep feeding him the puck, but no bueno.  Stewie, like the rest of the Blues' scorers tonight, was a one-hit wonder.

Then just 2 minutes later, Halak gets the puck to Jackman, who passes it up to Sobotka.  To be honest, it was hard to believe that Sobotka's shot actually went in the net.  It looked just like a regular old shot on goal.  But take a look at the replay.  Sobotka was playing Ramo the whole time looking like a pass and then rockets the puck through Ramo's five hole.  Blues up 2-0 and Halak gets as assist.

Maxim Lapierre starts to relapse a bit tonight and interferes with and then takes a cheap shot from behind on Brian McGrattan.  Blues go to the penalty kill for 4 minutes (2 minors) while Maxim sits in the box and thinks about the bad choices he has made in life.  But the Blues kill the penalties and keep the hope of Halak's shut out alive and well.  The period ends with the Blues up 2-0.  But look at this possession chart for the first.  This is what domination looks like in hockey. 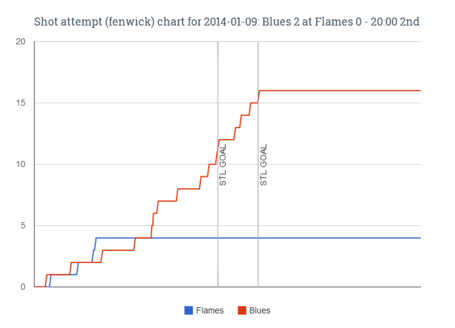 Second period starts pretty much where the first period left off.  Sobotka and Bouwmeester both get some nice chances on goal.  Halak continues being Halak.  Even when Backland crashes into the Blues goalie, Halak still manages to make the save.  However, Jackman takes a penalty on that play and the Blues are back on the kill.  Flames start showing up for the game and actually have some nice chances on Halak.  But the force is strong with Halak, and he manages to keep the puck from crossing the goal line by sheer willpower during the penalty kill.

Calgary finally finding their hockey legs during that power play actually starts to play some even strength hockey.  They finally get some quality time with the puck in the Blues' zone, but never manage to actually score.  Paajarvi has a great breakaway but is unable to lift the puck over the pads.

Play shifts back and forth and eventually the Blues end up back in Calgary's zone after a giveaway by Magnus.  As all the Flames are on the opposite side of the ice, Cole stands there all alone in front of an empty Calgary net.  Puck gets passed to Cole.  Cole puts puck in back of net.  Score Cole score. Blues now up 3-0.

Brendan Morrow slashes Wideman, to give the Flames another chance.  But they fail to capitalize.  So the Blues, being the nice guys they are, give the Flames yet another opportunity to score on the power play when T.J. Oshie goes off for tripping 8 minutes later.  But the Flames being the ungrateful Canadians they are, fail to fully appreciate the opportunities the Blues have graciously provided and are unable to score on either power play.  The period ends with the Blues on the power play after Stajan held Morrow with 18 seconds left to go in the period. 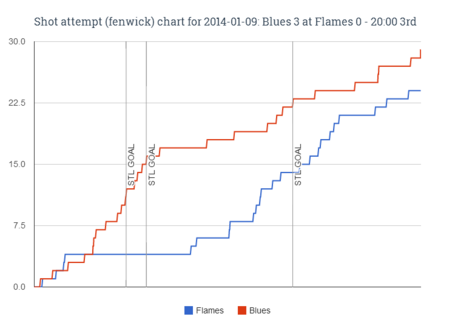 Call it score effect.  Call it a valiant effort.  But the Flames just had too much ground to make up.  At least this chart looks slightly better for the Flames than the one at the end of the first did.  Still, Blues continue to do what they do best, dominate possession of the puck.

Starts off with a power play for the Blues.  Which means get the puck to Pietrangelo so he can blast shots from the top of the circle like Luke bullseye-ing womp rats in his T-16.  Blues go up 4-0.

And Calgary wastes no time and gets right back on the penalty kill after Westgarth is sent away for roughing up Ian Cole with a high hit.  This time it is Tarasenko, who has apparently been staying late after practice and working with Brett Hull, who spins around and blasts a rocket while on one knee.  Blues now up 5-0.

What number do you get when you turn 91 upside down?  That's right.  (h/t to @woodystl for that little gem).

The third period saw the Blues valiantly fighting to protect Halak and his shut out.  Prior to the Tarasenko goal, Roy did one heckuva job breaking up a breakaway by the Flames and managed to avoid a penalty.  Then when Stajan started to try to get fresh with Halak, Shattenkirk stepped in to protect Halak's honor.

The rest of the third was well hockey.  Shots made.  Pucks saved.  Penalties served.  The Flames just were not prepared for tonight's game and the Blues just trounced them.  I mean it was an old fashioned shellacking that if I was a Flames fan, I would probably take up basket weaving or something for the rest of the hockey season if I had to watch my team play like that.

Final possession (fenwick) chart of the night...yes, that is the "score effect" you are seeing in the third. 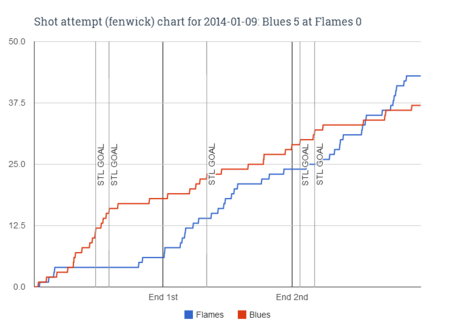 I don't know about you but this was just a fun game to watch.  It was great seeing Jaroslav back in goal.  It was great to see Cole get a second goal for himself this season.  That Tarasenko goal is just a taste of what is to come from that kid.  Stewart seems to be back to his old self (kind-of/sort-of) and of course Sobotka and Petro. This is the sort of game that I could watch again from the start.  If it wasn't already 12:31 am EST and I had to go to work tomorrow today.

Blues At Flames GameDay Storystream: Let's Not Have A Repeat Performance