Game Time The Paper Is Coming Back

In January we will mark 20 years of having a fan-run paper sold outside Blues games. You can subscribe too.

Share All sharing options for: Game Time The Paper Is Coming Back 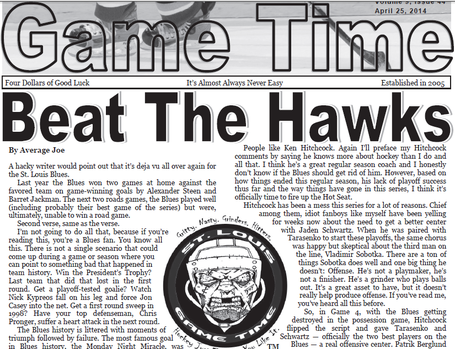 Hey, Blues hockey returns for real in just six days. And so will the paper version of Game Time. Yes, we're doing it again.

Hi. I used to write a fuckton around these parts. I was kind of in charge, drawing the big imaginary paycheck. I made sure we did really well in the annual Swear Wordathon for the SBN hockey blogs. This will be the third season where I'm publisher of the paper we sell outside every Blues home game. You've read it before, right?

Just in case you haven't let me give you a brief rundown. In January, we will mark 20 years for a fan-run paper being sold outside the Blues' current home. It happened to coincide with the first game in the building, which happened to be after a lockout. Jeff Collins (aka Jeffio) started that thing and kept it going for 10 years. The season that was lost to the lockout kind of talked him out of doing it anymore. So up stepped Gallagher to take the wheel as the Dred Pirate Roberts. Until there was another lockout. And then he decided going to bed the night before games was fun. So I got behind the wheel of the ship.

We print 24 pages of Blues hockey goodness for every home game. And then the playoffs. We have stats and jokes and prospect reports and analysis and jokes. It's a think paper, not flimsy. And if you come down to the arena, we sincerely hope you'll give us a try by the garage driveway, just north of the 14th Street entrance and outside the City Hall lot on the northeast corner of 14th and Clark.

But say you don't live in St. Louis. Or you don't have season tickets but you want every game. You're going to have two options to get the paper this season without actually going to the game.

Option 1: Subscribe to the paper via email. For just $2 an issue, you get 41 pdf issues emailed to you, often 12 hours or more before the game starts. Plus, every playoff game is free. If you're interested, you can PayPal our Accounts Receivable Department (my lovely wife) the $82 for the season at gametimehlee@gmail.com. If you'd rather send us a check through the mail, email for an address.

Option 2: Say you don't want every issue. Or you don't want to pay for the whole season up front. We're going to be selling every individual copy online on game nights. We'll have a story here on the site with a link to buy the paper for $3 an issue. The link will take you to a secure site where you can buy the paper and download it in pdf format.

We almost didn't come back this season because we had to find a new head vendor. We got one. He looks like Santa. That's gotta be good luck. I really wanted to come back to hit the 20th anniversary of Game Night Revue, Jeffio's paper. There's only one other professional team in North America where we know there's another fan paper. And it's in fucking Chicago with the Blackhawks. We can't fold up while those guys are scribbling with Crayons on their paper. So we're coming back for at least one more year.

Hey, if you've never read the paper and you want to know what the hell I'm talking about, send me an email at gtbradlee@gmail.com and I'll send you one or two from last season. I'm super proud of what we do in our spare time. My group of writers, some of the semi-regulars around here, are awesome. They put a ton of personal time into it. And I appreciate every single one of them.

I was a reader of the paper before I became a writer. I can't imagine coming to the game without one in hand. The best comparison I can come up with is being Jon Bon Jovi. Say his favorite music in the whole fucking world is Bon Jovi music. "Wanted Dead Or Alive" is his favorite song, and he especially loves it live. Well the bad news for Jon is that he has to actually make the music to listen to it. I love  to read Game Time, even when I lose sleep putting it together. And I guess in this analogy I'm Jon Bon Jovi. I've had worse hair before.

Thanks for reading and supporting.