Who Stays On The Blues' Roster After Latest Round Of Cuts?

Mueller, Fraser, and Beach are Chicago-bound as the Blues trim their roster to 27.

Share All sharing options for: Who Stays On The Blues' Roster After Latest Round Of Cuts?

Yesterday, the Blues assigned Peter Mueller, Cody Beach, and Colin Frasier to their AHL affiliate, the Chicago Wolves. Both Fraser and Mueller have extensive NHL experience; Mueller has 297 games worth and Fraser has 358. The Wolves are about to get some firepower, but this firepower shows that the Blues can afford to let players who may be classified as marginal third or fourth liners on other NHL teams slide down a notch to the AHL. They're not scrambling for pieces to fill slots; both Fraser and Mueller were perfectly fine during the pre-season. I expect Mueller to play with the Blues again at some point this season as an injury call-up.

The issue that the coaching staff has now is who to trim from the roster. The Blues have 27 players; they need to cut that down to 23 by Tuesday at 4:00. Good luck to the coaching staff, because some pleasant surprises have made this process harder than usual. 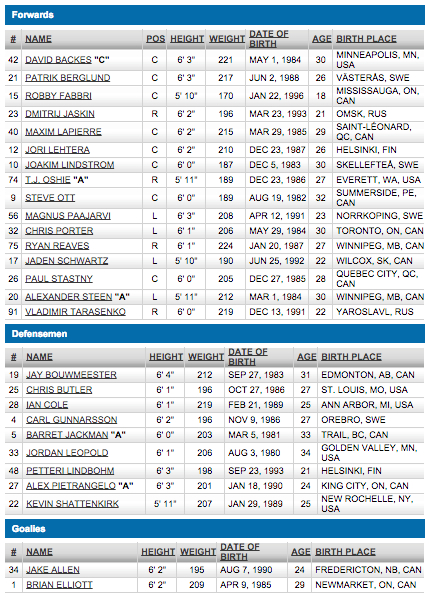 The 27 count includes Carl Gunnarsson, who more than likely will not be ready by opening night. Who goes? Hitchcock has hinted at carrying eight defensemen, which leaves room for Petteri Lindbohm, who has made a great impression. Out of the defensemen on that roster, counting a healthy Gunnarsson, chances are good that it'll be Lindbohm or Chris Butler that goes. Butler, who is a native St. Louisan, would be a great story for opening night. I'm not sure if his play's warranted it though. Lindbohm would return to Finland if cut from the team.

With eight defensemen and two goaltenders, that leaves 13 forwards, or one extra spot. Right now the Blues are carrying  16. They have held on to their 2014 first round pick Robby Fabbri this long; I really think he gets a couple games with the team at the very least to see what he can do against a full NHL squad before he gets sent back to juniors.

The big question marks are Magnus Paajarvi, Dmitrij Jaskin, Chris Porter, and Joakim Lindstrom. Porter has been shuffled between the Blues and their AHL affiliate enough to where it's basically expected. Magnus Paajarvi has been a non-entity thus far, but do they really want to eat time that Jaskin could be playing by keeping him up here instead of playing on the Wolves? PRV will probably be the extra forward, with Lindstrom making the roster. Why do I say that?

Hitch was so pleased with Lehtera and Lindstrom last night there's a chance they start season together. Would move Tarasenko with Stastny.

I think that last tweet tells you Joakim Lindstrom will make the team. Although he played the you never know what can happen card. #stlblues

Life would probably be easier for Hitch if he just carried seven defensemen, sent Butler down once Gunnarsson was healthy, and let PRV Lindstrom stay put. If Fabbri is sent back to juniors, then Jaskin gets his spot. Butler isn't a bad option as the just-in-case-of-injury guy.

Who do you think we'll see on opening night?