Yes, you read that headline right - T.J. Oshie scored four times in the shootout to lead the US over Russia 3-2.

The IIHF's shootout rules are significantly different than the NHL's. After the first three shooters, the coaches are allowed to repeat players as much as they'd like. So, after T.J. Oshie's first goal on Sergei Bobrovsky, and the fact that situations such as these are basically why Oshie was chosen to be on Team USA to begin with, Dan Bylsma sent Oshie out there a few more times. This is what the scoresheet looks like:

Yeah, you're looking at that correctly. Oshie shot six times, and scored four goals. Ilya Kovalchuk shot four times and scored twice. IIHF rules are weird, but so what. T.J. Oshie is America.

@NBCSports @OSH74 I'm glad we got that guy! #InOshieWeTrust

(That one's actually from the president and not the PR team, because he signs his tweets. I think.)

And the granddaddy of them all:

For proof that Oshie's goal makes him an American hero, here're Twitter's trending topics. In Atlanta: 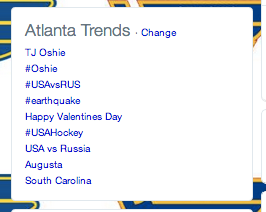 Anyone else think that IIHF rules are weird now? Yeah, me neither.