The Olympics are finally over and the Blues return to action on Wednesday night. Let's take a look back to see how the nine Olympians fared.

Share All sharing options for: The St. Louis Blues Olympic Wrap Up Analysis

The medals have been handed out, the dogs have been rescued, and the Blues are getting ready to resume the daily grind of practices and games to wrap up the last quarter of the season. They're back in action Wednesday night in Vancouver to put the games behind them and focus on playoff position.

A look back at each individual player's performance is still warranted. The Blues organization was well represented in these games, and the players deserve recognition. 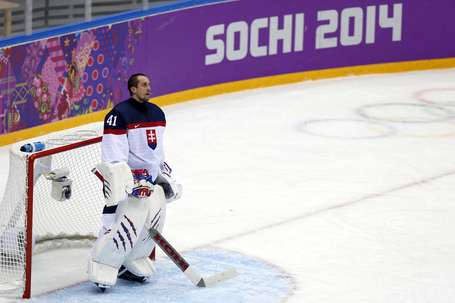 Jaro did not get off to a good start against Team USA in game one, allowing five goals on 25 shots. He also did not play well against the Slovenians, allowing three goals on 31 shots. He finished the tournament after that game with a GAA of 5.13, and a save percentage of .857. It was not good. There was also the controversy regarding if the Slovakian coach told him he was done for the tournament or not after game two - turns out the coach didn't, but Jaro was such a good judge of how he played that he assumed (correctly) that he was done.

There isn't a player whose stats scream "small sample size" better than Halak's. There are also other factors at play - in the 7-1 loss to the United States, Slovakia's defense didn't show. Even Chara looked disinterested. In the 3-1 loss to Slovenia, the defense was better but still not exactly quality stuff. Either this is evidence that goalies play better when they have confidence in the players in front of them, or it's evidence of how much Halak relies on the Blues' strong defense and Ken Hitchcock's system. You can't really judge Halak well, and his stats, while disappointing, should not be indicative of his play going forward back in St. Louis. 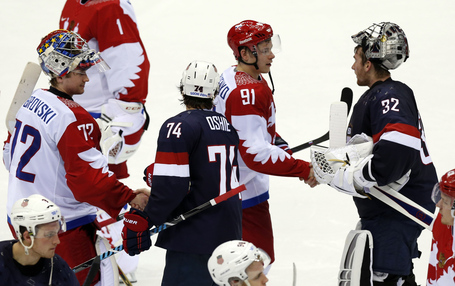 Tarasenko had a disappointing Olympics as well - not from a gameplay standpoint necessarily, but because he wasn't out on the ice enough to accomplish anything. He finished with an assist, which is a miracle because his average ice time was a paltry 9:30. What gives? There were rumors regarding the coaching staff for last year's World Championships not being happy with Tarasenko's "defection" to the NHL. He didn't make the roster, while many less-talented KHLers did. This Olympics the KHL and NHL guys had a divide right smack dab down the middle of Team Russia's locker room; last year's circumstances could be the same here. 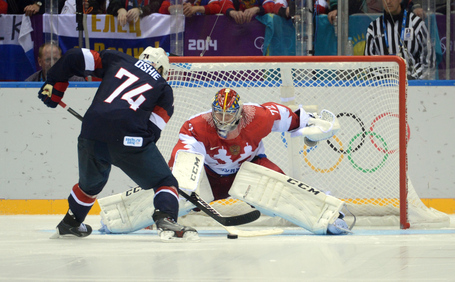 Well, we'll always have the T.J. Sochi phenomenon, won't we? Oshie did what he was selected to do - score goals in case of a shootout. He did that, and also had a goal and three assists for Team USA in the tournament. He was a plus player until the Bronze Medal game against Finland. Overall Oshie played as well as we expected him to, and presumably better than everyone else thought he would. Not bad for a fourth-line guy who averaged 11:52 a game. 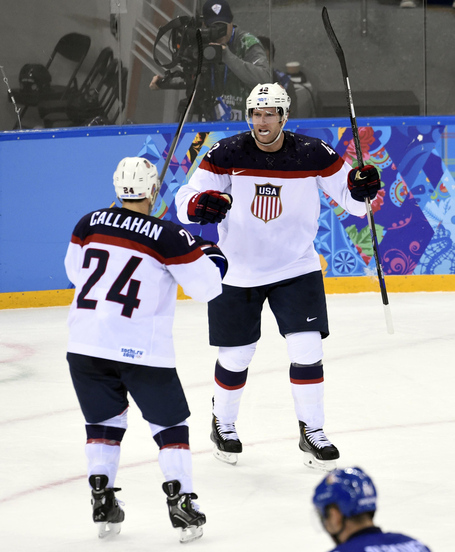 There were a few times during the game against Russia as well as the game against Canada where I thought Backes would forget that he was playing by IIHF rules. He was a big, powerful force on the ice, crippling the lesser teams that the US played and frustrating the Russians and Canadians. Another guy who was a plus player before that debacle of a Bronze Medal game, Backes finished the Olympics with three goals and an assist. Unfortunately, he - like the rest of Team USA - was a puzzling non-factor in the game against Finland. Tired? Emotionally drained? Probably both. Let's hope he comes back to the Blues looking for some redemption. 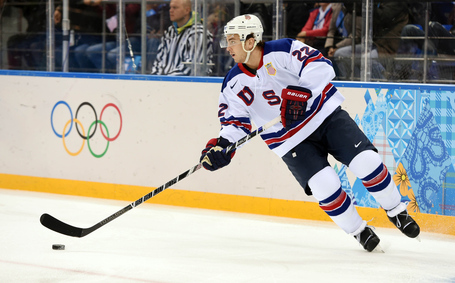 Kevin Shattenkirk was probably the best member of the Blues on Team USA. Quietly doing his job on the blue line, Shatty played over 16 minutes a game, set up three goals, and finished +3. A single even strength goal did not go in while he was on the ice. He was significantly better than Erik Johnson was in 2010, so if you're still wondering who won that trade (why are you still wondering?), here you go. 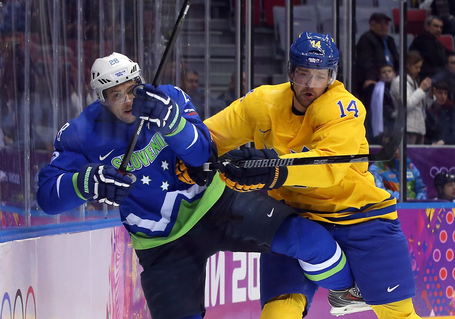 Where in the ever loving hell is this Berglund in the NHL? He plays like a man possessed every chance he gets to put on Sweden's sweater. He had a goal in Swedens' first game, finished with two goals and an assist, and was actually hitting people on the ice (and into the boards) and using his size effectively to drive the net. It makes one wonder what the difference is between the NHL and international play - is it coaching direction? Is it motivation? Who knows.

Maybe Bergie needs to start wearing his Tre Kornor sweater under his Blues one. 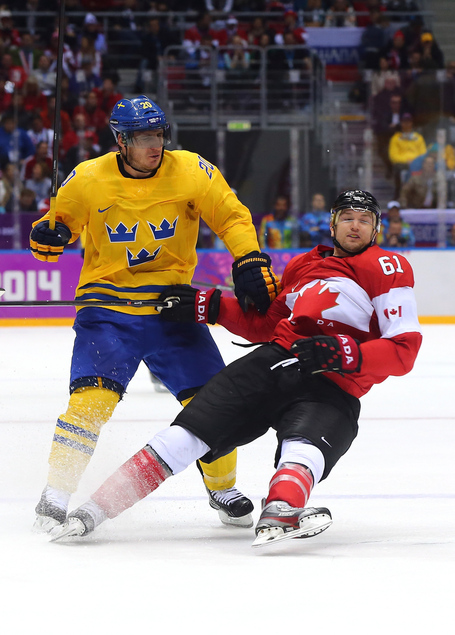 Steen was so good Rick Nash fell over just looking at him.

Just kidding, but Steen was pretty sharp. He finished with a goal and three assists, played 17 and a half minutes a night, and was out there in every possible situation: even strength, power play, and penalty kill. His shooting percentage was surprisingly low (4.35%) but he threw everything he could on the net, taking 23 shots, a Team Sweden best. Steen's had a tremendous year for his all-around game, not just scoring, and that was on display internationally in Sochi. 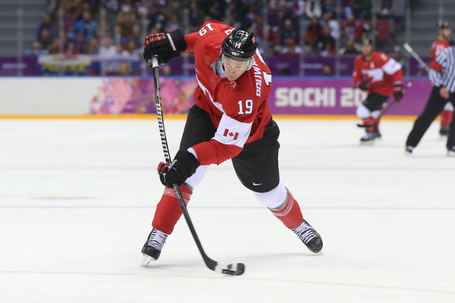 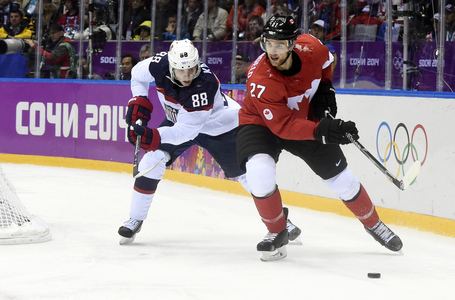 I'll go on and review these guys as the tandem they are: damn, they're good. The Blues' top defensive pairing was Canada's number two (Duncan Keith and Drew Doughty made up pairing number one), but they got heavy minutes a night. Bouwmeester played 16:26 a night, and Pietrangelo averaged 18:34. Finishing a +3 and +4 respectively, both contributed to the offense. A shot by Bouwmeester against the United States set up the game-winning goal. Bouwmeester threw the puck at the net 11 times, Pietrangelo 12. After a bit of a flat start, which applies to the whole of Team Canada early on in the tournament, they found their groove and contributed to Canada's stifling defense.

All in all, the Blues performed well, with a few exceptions. Halak's performance won't quiet any trade rumblings and discontent, and Tarasenko didn't have a chance to show the world why he's a 15 goal scorer so far this season, but the rest of the guys illustrated why the Blues are starting post-Olympics at the top of the Central Division.

Also a plus, no one was injured (that we know of).

What're your opinions of the Blues' overall performance? Leave 'em in the comments.