To Be The Best, You've Got To Beat The Best. Cliche, But True.

Share All sharing options for: Wheels Of Fire: Blues At Anaheim Ducks Preview

Wednesday night, the Blues provided our first glimpse of post-Olympic hockey, and while we lost 1-0, it wasn't all bad. Admittedly, I fell asleep before the game ended, but I did catch the majority of that game. Most of the issues looked more like physical fatigue, rather than mental errors to me. That's what I had hoped for, and I think that's what I saw. The toll from the Olympic schedule and travel won't be undone in one night, but it will be only temporary. Once the body recovers, I expect that we'll see a return to the Blues Hockey that we've come to love this year. It's just one game, obviously, but I like where our heads are at. The bodies just need time to catch up. After tonight, there are just 2 more games before we reach the crossroads of the NHL Trade Deadline. I'm so glad that we've almost got that behind us.

The Ducks are making many of the same adjustments we are. They had 7 Olympians, and 6 of them made it to the medal round, meaning that they are also freshly returned from Sochi. The lone early return was Swiss goaltender Jonas Hiller. The jet(lag)-set include gold medalists Ryan Getzlaf and Corey Perry, silver medalist Jakob Silfverberg, bronze medalists Teemu Selanne and Sami Vatanen, and the participation ribbon-winner Cam Fowler. This is Anaheim's first game, so they'll be testing the waters a bit, too. While you can practice all you want, the true test is not made until there's game action. I'd expect those guys to be a little tentative, at first. However, they have had a few more days of rest, so they'll draw some confidence from that.

And really, they should be very confident. Even after going 5-5-0 in their last 10 games, they have still maintained the best record in the league at 41-14-5. They are sitting on top of the world. Like a lot of teams in the league, they stumbled a little just before the Olympic break. The Ducks had a home record of 20-0-2, not a single regulation loss, going into the Jan 21st game against Winnipeg. They lost that one 3-2, and went on to lose 4 more in regulation before the break came two and a half weeks later. This long layoff may be just what they needed to right the ship. Nonetheless, the Blues and the rest of the NHL now see that the Ducks are mortal, after all. Even Teemu.

The #FancyStats reflect the downward trend leading up to the Olympic break. From Extra Skater: 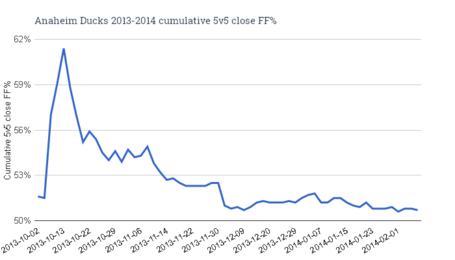 This demonstrates the Ducks' 5v5 Fenwick (shot attempts for vs shot attempts against, not counting blocked shots, during 5 on 5 play) expressed as a percentage. As they get farther from their hot start, the Ducks have looked more and more human, to the point where they are juuuust above the break-even point of 50%. Whether they can improve on this after the break, or not, remains to be seen.

The largest point-producers for Anaheim are the obvious choices Ryan Getzalf (29g, 38a) with 67 points and Corey Perry (30g, 30a) with 60 points. After that is a steep drop-off: Nick Bonino with 40 points (16g, 24a). Keep an eye out for Hampus Lindholm ... this rookie D-man is quietly having a great season, and might be a Calder nominee later this year.

Final Verse: Another late one, of course. The opening faceoff is scheduled for 9:00 PM St Louis time, although I wouldn't be surprised if there was a pre-game ceremony for the Duck Olympians pushing that back a little. The TV broadcast is on FoxSports MW, and the radio call will be on KMOX 1120 AM. The GDT should drop a little before the puck does. Until then, this is your pregame warmup. Gather here, monger the latest trade gossip (I feel free to predict the Blues stand pat), scheme a way to get your favorite player under the salary cap, and speculate how much worse Cam Fowler is getting it this time around: