For the second time this road trip the St. Louis Blues fall to the opposition 1-0. The team has failed to show the spark and motivation they had shown before the Olympic break. How did the game go down you ask? Well I am back to recap this one for you.

Share All sharing options for: Recap: Blues Fall to Ducks 1-0

Annnndd I am back. I apologize for a lack of a recap Tuesday. Shit went down at my now former workplace and after shall we say shitastic Blues performance I just wanted to go to fucking bed. SOOO onwards and upwards! There has been quite a bit of Blues Buzz ahead of tonights game. For those of you that wanted Miller here, well Ladies and Gentlemen the Ryan Miller Era begins Sunday.

We said goodbye to our friends Jaroslav Halak and Chris Stewart along with Prospect William Carrier, a 2015 first-round pick and a conditional 2016 third-round pick. It was a high priced trade that also brought cheep artist Steve Ott to the Blues. I am not one to hide my opinions on certain players, and I won't change that now. I am not happy with Ott being part of the deal, I don't like his style of play and I think he does extremely dangerous and stupid things at times. With that being said I am happy to wait and see how this trade helps and or hinders us moving forward... That my dear Blues fans is the good news today.

The game tonight was overshadowed by this trade and to be honest I wish the game could have been a stellar, breakout performance for the Blues. Needles to say it was not. The team from St. Louis as a whole has seemingly cooled off during the olympic break. Scoring has been the team's biggest problem in the last two games. They are taking shots... Oh Boy are they taking shots... However, the shots they do take go wide, hit the post, or are stopped easily by the tender for the opposition. The players look fatigued and uninspired in their play. Tonight some can chalk it up to the shock of losing close friends and teammates or you can chalk it up to the February Slump the Blues tend to trod through in the second month of the new year. Either way it sucked to watch.

Over the course of 60 minutes the Ducks would be the only team to put a tally on the scoreboard. The game would trudge on after the first period and it would seem like days would pass as the game progressed. The teams would rev their engines at each other and fire warning shots past the goaltenders heads but nothing much would come of it other then some exchanging of words, fists in face, and T.J. Oshie skating away from Ryan Getzlaf laughing, after Getzlaf tried to coerce Oshe into dropping the mitts. Captain David Backes would drop the gloves with Corey Perry which just led to the canadian to put Captain america in a headlock and laugh like the joker as Backes struggled to get his full agression out. From there Alexander Steen, and several other members of the Blues and Ducks would chirp at one another.

The Game saw a barrage of bad penalties taken at bad times, often neutralizing a power play opportunity or giving the Ducks an advantage in momentum and mind games. It did not help the team from St. Louis to be joined by official Tim Peel. Odd penalties were called, but like I have mentioned many times in my previous recaps. Teams that go on to be successful do not let penalties override the game, they find ways to win. Seeing red is not helping our cause, unless it is used by channeling it into a scoring opportunity or goal.

Anaheim played a tough game defensively but the Blues were able to hold some from of pressure on them but just could not hit the net. This could become a rotating narrative as the St. Louis Blues' season progresses but I am want to see what happens once the team can shake off the rust, as well as how the addition of Miller and Ott will help. Miller can save the games for them but the team's offence needs to put the puck in the back of the net for him to make a true difference on the team. He couldn't score the goals in buffalo so don't expect him to be St. Louis' own personal hockey jesus. For now the team moves on to meet their new teammates in Phoenix for their battle in the desert on Sunday.

BTW, congrats to Jeff Tyni on becoming an answer to one of @ctrauma's future Game Time Trivia questions.

"It was very short and it didn't get it into the Blues zone" Something Panger just said. #hockeyporn

Seriously folks, I know we're in a bind, but isn't it a conflict of interest with a Duck employee as backup? What if he gets in? #stlblues

Schwartz with a glorious chance and hits the goal post.

St Louis Blues were credited with 11 Missed Shots in the 1st Period. Season high for a game is 20. #stlblues

An interesting #NHLDucks connection to today's trade: It's the second time Chris Stewart has been dealt when the Ducks have played STL.

No, Backes. Lovejoy's not worth your time.

New Frenchie to the box. 2 minutes for being so ruggedly handsome.

"...he opened the barn door and hit the ol' wickets." ...sometimes I think Panger just pulls made-up folksy cliches out if his ass.

Of ALL people, Berglund is the one to out a shot on goal. He has looked relatively competent in this game though.

I think if you hit both goal posts with the same shot, that should count as half of a goal.

For those that need a laugh of the night...

My boyfriend Sam did a Jay Bouwmeester impersonation tonight... 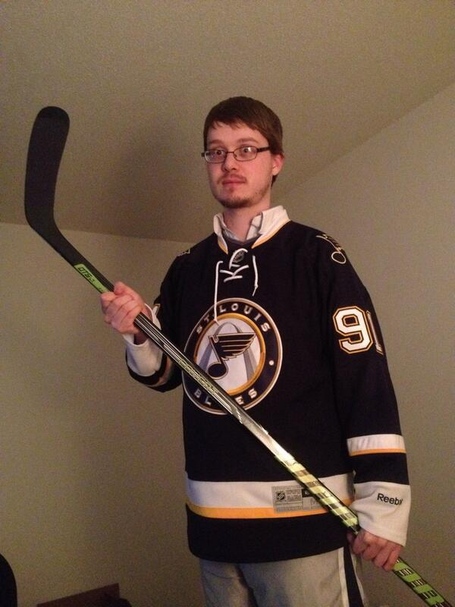