The Blues hung tight with the Flyers the last time these two teams met, and still lost 4-1. Is a better outcome in the cards tonight?

The Blues played a close game against the Philadelphia Flyers back on March 22nd, but couldn't manage to get the puck past Steve Mason, who was a save machine. It was frustrating, but it seems to be the default game setting for the Blues against teams in playoff position.

Unless they lose to the Dallas Stars. Then, apparently, the default setting is meh.

Here's the Fenwick chart for the game from Extra Skater - tell me if this is indicative of a team that doesn't try. 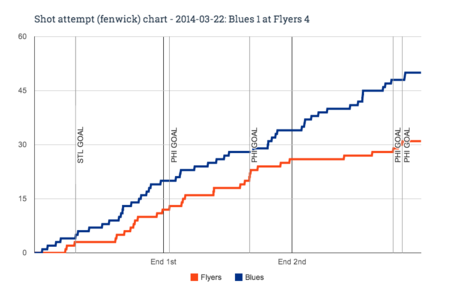 Now, tell me if that's a chart of a team who's having issues scoring.

Tonight's game for the Flyers is important, because they're fighting it out with the Rangers for home ice in the playoffs. Tonight's game is important for the Blues, because the Ducks are breathing down their necks for tops of the West and the Bruins lead in the President's race by three points. Just because the Blues've clinched a spot doesn't mean they can peter out down the stretch. The Flyers haven't, which is why they're dangerous.

This is your morning open thread. Check back for a Lighting the Lamp, some other goodies, a game preview, your GDT, and I believe a RBR recap. While you're waiting, head over to Broad Street Hockey and say hello to SB Nation Hockeys' fearless overlord, Travis.

Flyers At Blues GameDay StoryStream: Pick It Up