When the media hits the panic button, who can blame the fans for doing the same?

Share All sharing options for: Swing, and a Miss ... The Blues on KSDK.com

First thing's first - I don't know this writer, and I don't know his history with sports coverage. But when I saw some Blackhawks fans making hay out of this article, I felt compelled to put something up here.

What's going on with the Blues?

Oh great, another writer that wants to "fix" the Blues again. Ah well, at least the Blues are getting covered locally during the week of Cardinals home opener...

I went to a movie and came out to find that the Blues had lost 4-1 in lackluster style to the Washington Capitals(minus Halak in net).

In other words, "I couldn't be arsed to actually watch the game, but let me tell you everything that went wrong in it" ...

Alexander Ovechkin came in and draped the net in red Russian fury, scoring once to start things off and assisting on another goal.

Something that he's awfully good at ... it's like he leads the league in goal scoring or something ...

What is going on with this team? Let me run down a quick list of potential issues and ideal remedies.

Interesting to note that his "list" of issues includes 1 thing in bold. Get a shot on goal. Well, shots are always good to have, so that's not in the least objectionable. More shots are good. Is that really **the** problem, though?

They are the worst team in the NHL when it comes to getting shots on net. We want to. We try. We simply can't. Change that.

According to NHL.com, the Blues rank 22nd in the league with 29.3 shots on goal per game. Not a great ranking, for sure, but hardly worst in the league. Technically, not even the worst among playoff teams - Montreal is 24th with 28.6 per game, and tonight's opponent, Minnesota, is 28th with 26.7 shots per game. Not only that, but the gaps are pretty narrow. Even averaging just 1 more shot per game would lift the Blues over 8 more teams in the rankings.

If you go to the realm of #FancyStats, the Blues are a top team in shot attempts (not just on goal, but all shots attempted). We're 6th in the league at Corsi% in 5v5 play when the score is close. If you factor in blocked shots (Fenwick) then we drop all the way to 7th. This, per Extra Skater.

But that's the season-long view. This is a recent trend, though, right? The Blues were good, back in the fall and early winter, but now they suck at shooting on net! 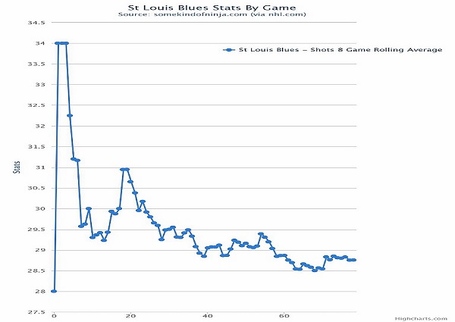 This chart is a rolling 8-game average (in other words, not relying on the hot streaks of Oct-Nov-Dec) of the shots on goal. The Blues have maintained an average between 28.5 and 29.5 since game 32 of the season - in other words, for over half of the season. There has even been a slight uptick.

Simply put, the Blues haven't gotten worse at getting shots on goal.

...and have now fallen off a cliff into pure despicable solitude. If you know a way out, comment below. I'd love to hear it.

Ummm... that's a little melodramatic, isn't it? You want to talk about falling off a cliff? Look at Vancouver. Look at Toronto. Look at those teams, their fanbases, and their seasons. Then come back and look at this with fresh eyes. Is it really that bad? I would have left a comment, but I had a lot more to say than space probably allowed.

but the Blues could still face Minnesota or even Los Angeles if the Wild hopped over them in the conference standings. Does anyone want to see The Kings stand between us and advancement for the third year in a row?

Really? Unless the league has realigned in the past week, it is impossible for the Blues to meet the Kings in the first round. I know it's a recent change, and a little tricky, but the new playoff format has been discussed a few times lately. It's kinda a hot topic right now.

The Cardinals were playing horrible and looked drained in 2006 heading into the postseason. They caught fire and never looked back.

Yes... because it's impossible to write a sports article in St Louis without a Cardinals reference. The Blues are not Chilean miners, nor are they major-league baseball players. Can we leave them out of the conversation for once? For a little while?

Dan Buffa is a Cardinals writer for Sports Rants. He is also a contributor to KSDK.com and Arch City Sports ...

Look, the guys aren't playing good right now, that's indisputable. Scoring is down - the Blues are getting roughly the same number of shots on net, but they're just not going in. At the beginning of the year, when the shots were going in at an amazing rate, we all knew that THAT wouldn't last. In a similar fashion, the current slump won't either. Obviously, the games remain to be played yet, and it's foolish to read too much into what's happening. To be so alarmist and melodramatic, though, is just plain silly.

Once the postseason hits, once the boys get a little healthier, I suspect we'll see a different team. Nobody knows what the future holds, but can we crawl off the ledge a little bit? The last thing we need is for the local media to be nudging people closer to the edge.