Five Reasons You Better Believe The Blues Can Beat The Blackhawks

The Blues couldn't buy a goal down the stretch, much less a win, and now we're stuck with the hardest first round opponent we could've gotten. Here's why none of that matters.

Share All sharing options for: Five Reasons You Better Believe The Blues Can Beat The Blackhawks

It's no secret that the Blues didn't end the regular season particularly strong. 6 straight losses, 2 straight shutouts, and only 4 even strength goals the entire month of April (2 of which came against Buffalo). The severe slide in play took a team that at one point had a 54% chance at the President's Trophy and dropped them all the way down to 2nd place in the Central Division, into the path of the defending Stanley Cup Champions, the Chicago Blackhawks. To say that Scottrade Center is suffering a crisis of confidence is like saying you should RSVP "no" to a Game of Thrones-themed wedding. (Nerd translation: an understatement)

Many of you have been searching for even a single reason why you should be optimistic about the postseason chances. And I'm here to tell you that in fact no, I do not have a single reason you should think the Blues stand a chance against the Hawks.

(Note: all charts & fancy stats listed below are courtesy of Extra Skater.com)

1. The regular season never meant jack in the first place.

Yes, Ken Hitchcock made a point of saying the Blues were actively pursuing the President's Trophy, and no one wants to head into postseason play on as sour a note as the Note has. But let's get one thing perfectly clear: it never mattered whether the Blues had clinched the top spot in the league by 15 points or sneaked into the playoffs on the last day as the second wild card. Like all other teams - in fact perhaps more so, given both the recent and ancient history of the franchise - this squad was always going to be judged by what they did in the Stanley Cup Playoffs. As far as this roster was concerned, the regular season was nothing more than an extended try-out for their respective Olympic teams (which 10 of them took full advantage of), followed by a 7 week warm-up for the real test.

6 straight losses to end the regular season? As of tomorrow night, that means just as much as those 11 goals in 2 games against the Florida Panthers. I shouldn't have to tell you guys this - as Blues fans we know all too well. No one outside of St. Louis could tell you that the Blues won the President's Trophy in 1999-2000, but they sure as hell can tell you how the LA Kings sneaked into the playoffs as an 8-seed and won the whole damn thing.

2. Reinforcements are on the way - they even brought a Tank.

While it is true the Blues were struggling before their extreme injury situation, the fact is that 8 key players were missing from action in the regular season finale: David Backes, T.J. Oshie, Alex Pietrangelo, Vladimir Tarasenko, Patrik Berglund, Vladimir Sobotka, Barret Jackman, & Brenden Morrow. That's 40% of the roster, mostly right from the top of the depth chart. And according to Hitch, none of them would have been able to go had Sunday been the first game of the playoffs (though whether or not you believed the coach is another matter). Sure, "everyone goes through injuries," but rarely are teams missing the top 40% of their roster all at once.

But what's that? Is that a bugle I hear?

Hitch says that every injured #stlblues would play before the first-round series is over.

Not only is Tarasenko skating on a regular line, he is doing everything ... looks terrific. #stlblues

That's right folks, the cavalry is on the way. That Backes, Oshie, and many of the others should be a go for game one is not too surprising, and Berglund does still look unlikely off the bat, but getting Tarasenko back is monumental. 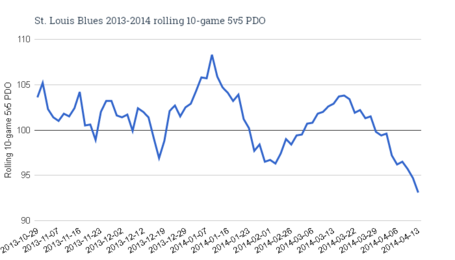 The Blues current down-ward trend in PDO began after the March 15th game against the Predators when Frank the Tank went down with a mystery hand injury. The Blues offense has been sliding downhill ever since, so getting 91 and his team-leading 58.7% corsi rating is quite a get for a team desperate secondary primary scoring.

3. The Blackhawks aren't exactly tearing it up, either.

Again, no team in the league has limped into the postseason as much as the Blues. However, the Hawks have been pretty hot and cold lately as well. They've gone 5-6-0 in their last 11 games, including having lost their last 2 games of the year 4-0 to the Capitals and 7-5 (!) to the Preds (!!!). And have a look at their PDO chart lately: 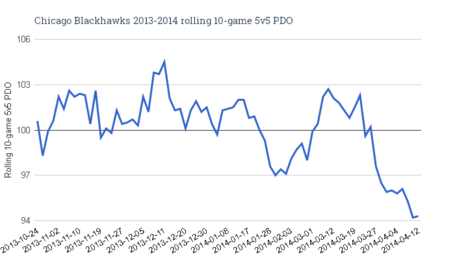 That sharp slide comes with the obvious caveat that Chicago has been missing Jonathan Toews since April 1st and Patrick Kane since Morrow was shoved onto his knee on March 19th. However, don't assume simply adding those two means the Hawks will steamroll through the series. Especially because...

Have a look at Rocky & Bullwinkle's possession numbers in the four games they played against us this year, along with our team numbers in that same game:

*Kandy Kane played less than 8 minutes before he left the game.

As you can see, the Blues had significantly more success against Laurel & Hardy when they had last change and could match the SOB line against them. It's also worth noting that in the 12/28 game, the following Blues all had CF of 60% or greater: Backes, Tarasenko, Magnus Paarjarvi, Jaden Schwartz, and Pietrangelo. In the game in March, when Hitchcock couldn't get the exact matchups he wanted, the team suffered greatly. There were other reasons for that debacle, but having the last line change will make quite a difference.

If the Blues can take full advantage of favorable match-ups, this will be a significantly more competitive series than we first thought. Which is good, because...

5. If the Blues can beat the Blackhawks, they can seriously win The Stanley Cup.

All year long as the Blues tore through the league, that one question was in the back of our mind: "Is this team a legitimate Stanley Cup contender?"

Well, we get to find out right away.

Despite the Blackhawks 3rd place finish in the division (propped up by 15 charity points, BTW), Chicago is arguably the biggest Cup favorite. No one else the Blues could face in the West would be a bigger challenge than the Hawks. San Jose? Merely the Hawks without the winning pedigree or 20-Cent. The Ducks? They're as doomed to fail as the NHL Guardian Project. You wanna talk about goal scoring trouble? The Hurricanes scored more goals than the Kings. The Avalanche? Heh, please.

If the Blues can beat the Blackhawks, they'll have as good of a shot to make the Cup Finals as they've had since 1986. What more reason do you need to believe this could happen?