Share All sharing options for: This Is How Brent Seabrook Reacted To His Headshot On David Backes

Someone needs to e-mail this photo to the Department of Player Safety: 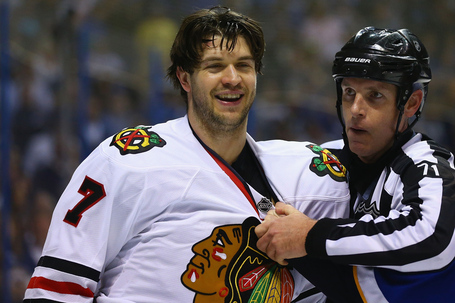 ST. LOUIS, MO - APRIL 19: Referee Brad Kovachick #71 restrains Brent Seabrook #7 of the Chicago Blackhawks who laughs after lying out David Backes #42 of the St. Louis Blues in Game Two of the First Round of the 2014 Stanley Cup Playoffs at the Scottrade Center on April 19, 2014 in St. Louis, Missouri. (Photo by Dilip Vishwanat/Getty Images)

Seabrook might've been remorseful after he thought about the hit, but he doesn't seem to give a shit immediately afterward.