How To Find The Game Time Paper

You know we produce a fan-run paper/program that we sell outside every home game, right?

Share All sharing options for: How To Find The Game Time Paper 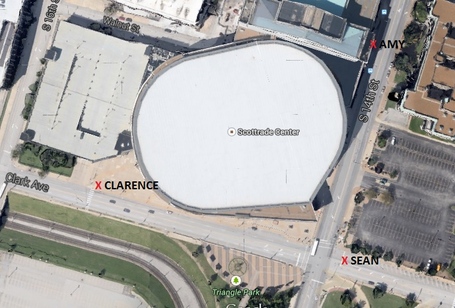 Welcome to Friday. Just 11 hours until the puck is dropped on Game 5 for the St. Louis Blues and Chicago Blackhawks in their first-round series. Nervous? Jittery? Distracted?

Well let me give you a taste of what you can get tonight either down at the game or at home on your computer, the Game Time paper/program we sell outside the building. Live out of town and never see our vendors? Go to games all the time and walk straight past our vendors? It's OK. There are the homeless people and the scalpers and the police and the end times evangelists. There's lots going on. So let me help you out.

Up above, that's a map of where our vendors are located. The red X marks the spot. If you're going to the game, stop by and say hello and buy a paper. It's 24 pages of stats, opinions and analysis. Oh, and jokes. Blackhawks fans do not find them funny. How about a taste of the front page? Here's the beginning of the cover story by Average Joe:

A hacky writer would point out that it's deja vu all over again for the St. Louis Blues.

Last year the Blues won two games at home against the favored team on game-winning goals by Alexander Steen and Barret Jackman. The next two roads games, the Blues played well (including probably their best game of the series) but were, ultimately, unable to win a road game.

Second verse, same as the verse.

I'm not going to do all that, because if you're reading this, you're a Blues fan. You know all this. There is not a single scenario that could come up during a game or season where you can point to something bad that happened in team history. Win the President's Trophy? Last team that did that lost in the first round. Get a playoff-tested goalie? Watch Nick Kypreos fall on his leg and force Jon Casey into the net. Get a first round sweep in 1998? Have your top defenseman, Chris Pronger, suffer a heart attack in the next round.

The Blues history is littered with moments of triumph followed by failure. The most famous goal in Blues history, the Monday Night Miracle, was followed by a Game 7 loss. Hell, the front office even celebrates this dichotomy - earlier this season the Blues made a fucking poster of Steen scoring in Game 1 last year in a series the Blues ultimately lost. That goal, in the grand scheme of things, meant nothing.

So yeah, I'm not going to write 1,000 words about last year because fuck last year. It's a new year and, unlike the Kings, the Blues aren't intimidated by the Blackhawks. They can win this. They have been the better team three out of the four games. All they need is some people to step up.

If you live out of town or you don't have tickets and you want the paper, we're making it easier. Come back to Game Time at 5 p.m. and we'll have a link where you can buy the electronic version and download it yourself for $3 compared to the $4 it would cost you outside the arena tonight.

If you're looking for something to entertain you in the meantime, you can always buy last Saturday's issue for the low, low price of just $2.

The paper and the website have very little shared copy. If you haven't given us a read, try us. You'll like us. We're hardcore Blues fans just like you. This is made for you.