Share All sharing options for: Penalty Kill Save Percentage

Once again, let's look at Penalty Kill Save Percentage. I am going to look at 2009-10 through 2013-14. I have shown repeatedly that different goalies are different at Even Strength. As always, in order to do regression analysis I constructed logits (ln odds of a save). I threw out the goalies whose logits were zero or undefined. All the regressions are weighted by number of shots faced. Lastfirst is the name of the goalie variable.

There is no year effect in this data.

There is a small correlation between ESSP and PKSP. ESSP explains about 8.5% of the variability seen in PKSP (i.e., not much). 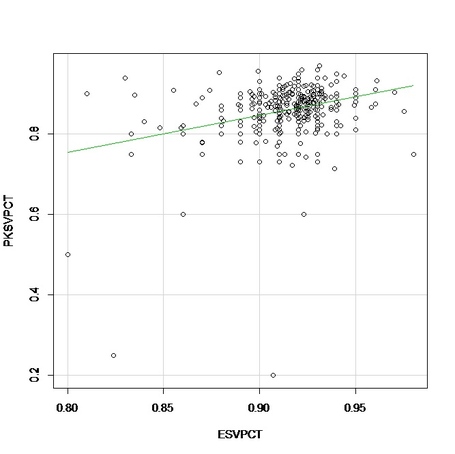 Some of the apparent correlation is probably being driven by the 4-5 goalies who are in the left lower corner.  In the regression analysis, weighting by shots faced effectively removes these data points.  Here they are getting the same weight as everybody else.  The true correlation is likely closer to zero.

"Absence of proof is not proof of absence." From the ES data, we know that it takes several thousand shots to tell goalies apart. The busiest goalies in this data faced less than 1500 shots over the 5 seasons. There may well be a goaltender effect. However, if it is too small to see in 5 years of action, it certainly will not be visible in 1 year.

If a 0.874 goaltender sees 250 PK shots in a season, the 95% Confidence Interval for observed PK Save Percentage is 0.827 to 0.912. Looking through the data, there is no goaltender who consistently lies outside that range.