The Blues' head coach spoke yesterday after Doug Armstrong, and here's what he had to say about the biggest question mark in the series: the power play.

As DK mentioned in this morning's links, Lou Korac has the details of Coach Ken Hitchcock's interview session yesterday for those of us at work/too lazy to watch the interview.

For those of you who are not at work/not too lazy, here is the interview itself:

Hitch was direct and stressed that much assessment needed to be done by him on all levels - players, system, coaching staff, and himself. He also stressed (much as Doug Armstrong did, but slightly less gruesomely) that the Blues' seemed to lack the finishing move needed when you're in the playoffs.

You get a great evaluation on everybody, your team game and your individual play when you play significant opponents. It's not just based on playoffs. It's significant opponents. So when you play top dogs, you really get a good evaluation of what you have. We know what we have. Doug knows what we have. It's our job to just keep grinding and to keep getting ourselves better and better.

Unfortunately, it was evident during the season that the "significant opponents" were going to be difficult, especially after the drop-off in offense began halfway through the year. You could even argue it was evident before the trade deadline. Here's a look at the Blues' schedule and scores after January 1st (from the team's website). Each arrow marks a game against a team that finished the season in the playoffs, either in the East or West: 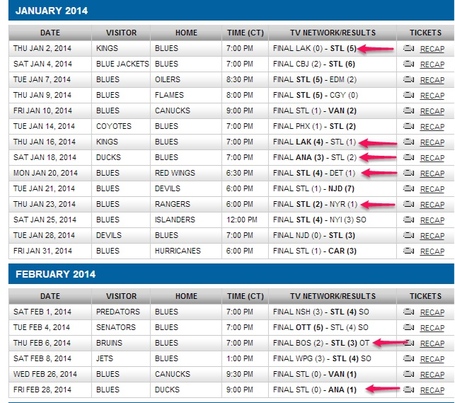 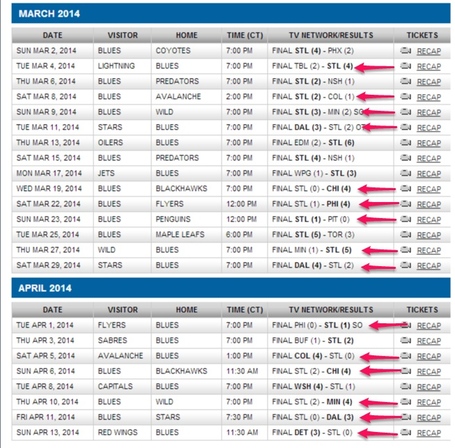 You can see a trend begin to develop. As the season pressed on, games against the playoff opponents got closer, with the exceptions of the Blues' blowouts of Detroit on January 20th (to be fair, half of the Wings were in traction then), a 4-2 win over the Bolts on March 4th, and a 5-1 win over the Wild on March 27th, the Blues last decisive victory of the season.

That's the questions that you ask of your players. Why are we pressing in that area? What are we thinking? Those are the questions that we've got to look at the video and live with all summer because those are the critical points of games. Those are the details that have been in our game for three years now that have given us a chance to have a great record. Those checking details have allowed our offense to get better and better, but I thought yeah, our power play could have been better. We would have liked to score goals, but even saying that, we needed to check better in some areas, too.

If you can find analysis of the power play in there, please let me know. He had to be asked about it again after this answer, and he replied "I'm not there right now. I haven't started figuring out stuff like that yet. Not there yet."

Is this evidence that the power play rests entirely on the assistant coaching staff? Is Hitchcock hands off there? Addressing everything but the power play is interesting; scoring with the extra man mitigates the other mistakes. Why wasn't this looked at?