Is The Blues Secondary Scoring An Issue? A SLGT Roundtable

There've been some friendly Twitter discussions among Game Timers regarding the Blues' offense and rate of scoring. What better way to discuss it than in more than 140 characters?

Share All sharing options for: Is The Blues Secondary Scoring An Issue? A SLGT Roundtable

The Blues have not been scoring at a torrid pace recently. It could just be a cyclical dip in production, or it could be indicative of a larger problem for the team with playoff ramifications. The goal differential still leads the league thanks to some early-season offense, but the team's dropped to fourth in goals per game (3.09 as of Thursday morning). Sure, that's not a big deal necessarily, but how many of these numbers are padded by David Backes and Alexander Steen's torrid starts, and how much of this is because the Blues've plowed through terrible teams?

What does coach Ken Hitchcock think about the scoring?

"You've got to be really careful in how you deal with that," Hitchcock said. "The minute you start talking about not scoring ... not scoring, you're in dangerous ground. You're focusing on scoring and not winning. The next thing you know you score four and let in five. So you're going to go through phases and stages in a season where you don't score as much as you did before and you're still going to have to win hockey games."

This roundable includes CrossCheckRaise, ArtLippo, and RobbTufts, who've been some of the the most active debaters of this issue on Twitter. You know who else we'd like for it to include?

You. God created the comments section for a reason.

Tim/CCR: I guess it all depends on how far you want to nitpick. If you look at just the past "x" games, then you’ll find all kinds of anomalies, but then you run the risk of small sample size giving you a skewed view. If you look at the long view, though, the Blues have done just fine this year. Sure, it’d be nice if it was spread around a bit more, recently. Nonetheless, the goals are still there, and the wins are still coming. This past week, we’ve scored 5 goals twice. Also, we’ve had two 1-0 wins (against some damn good teams). Which are more genuine? Can you disregard one set, point at the others, and say "These indicate what we need to worry about (pay no attention to the wins behind the curtain)"?

Let’s not try "fixing" a team that’s not broke. The Blues are neck-and-neck for best record in the league. Can we just be happy with that?

There’s a world of difference between the regular season and the playoffs, so trying to apply "right now" to what’ll happen in the postseason is foolhardy. Let’s just wait and see how the boys turn things up when it counts. I’m not convinced that the Blues we see now are identical to what we’ll see when the playoffs come.

Robb: Here is a chart showing their cumulative (or running total) goals-for/60 (5v5) 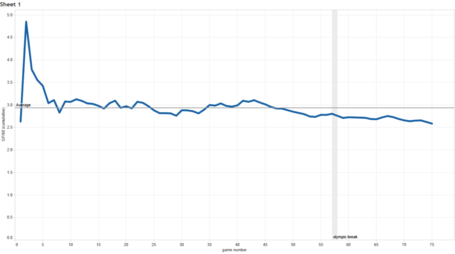 As you can see, the line has dipped the past few games.

Tim/CCR: Hey Robb - For what it’s worth (see my remarks above) … here’s the Blues shot percentage from Greg Sinclair’s site. This is a rolling 8-game percentage. 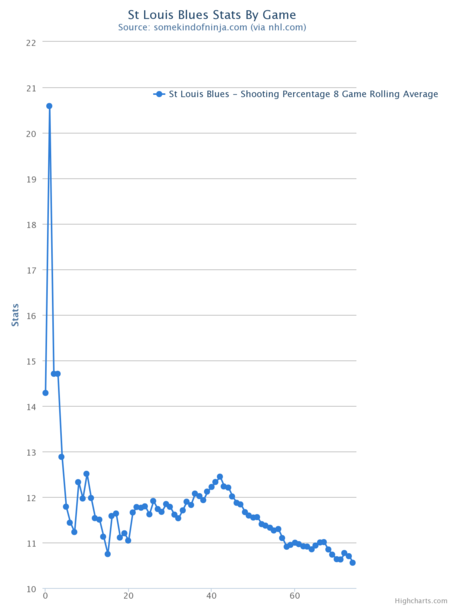 The shot% is down from before, sure, but it’s still above 10%. Much like Alexander Steen’s scoring in the early season, I don’t think anyone really expected that pace to continue. We knew it would slow down, so we shouldn’t panic when that reality comes. As long as we maintain the shot attempts (our Fenwick has been much more stable, holding at 53% during 5vs5 play) and we have >10% shot percentage, I don’t sweat it too much.

Robb: Interesting point about the FF% remaining steady at around 53%. The GA/60 is also remaining relatively steady at 1.9. The second game of the season really skews the trend lines however. If you remove that game, the GF/60 is actually a flatline while GA/60 trends ever so slightly in an upwards direction. The 7 game moving average (I used 7 because that is how many playoff games can be played -- I know it is random but just accept it) for SH% is trending in a downward direction. Is Sinclair’s shot percentage chart 5v5? Because the 5v5 7 game moving average is 3.66% which is NOT good.

So, at face value, 5v5 7-game rolling average Sh% of 3.66% is not good. However, just like an outrageously good SH% (a la Steen in Oct/Nov), it’s not necessarily sustainable, either. I believe it’ll recover, and find a middle ground somewhere. We’re not the Leafs, after all. /snark

Art: For a organization that preaches "balanced scoring" to its fan base, there should be a concern when the balance scoring disappears, and disappears for an alarming stretch. The fans base should be a tad uneasy. Let’s see here: An offense that was on fire at the beginning of the season, sustained during the middle stretch, then went limp at the end of the season… sound familiar right? Oh because it also occurred last season as well.

In the last 31 games, there are 2 forwards not named Schwartz, Backes, Steen, and Oshie that have double digit points in that time frame, and one won’t be back for a while. You can throw a million different stats out there, but when it comes down to it, there is more than a sliver of doubt that this team can score and beat the top tiered teams.

From my spot at the bar, the pieces are here to still make a deep run, the bigger concern is how these pieces are being put together.