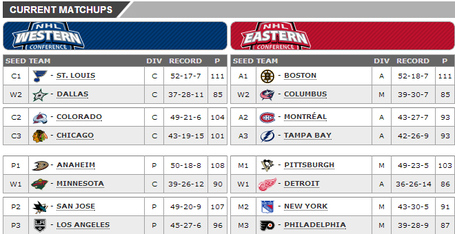 These are the current standings for the Stanley Cup Playoffs. If the season ended today, before any of the games are played, we would be facing the Dallas Stars. They are the lowest seed in the playoffs, but we have lost our last 2 in a row to them. With so few games remaining this season, it is a fair judgement to make that we will remain the #1 seed in the central. This means our primary concern will be who ends the season in the Wildcard 2 spot. Seeing as Central 2 and Central 3 will play each other in the first round, even if Colorado and Chicago flip, we will see neither until round 2.

Here is a look at the current standings for teams within reason to finish in the Wildcard 2 spot.

There are 82 games this season. The teams above have between 4-6 games remaining. I will be writing this article on a "most likely" basis. This mean's I don't expect 1 team to lose all their remaining games and 1 team to win all of their remaining games. Minnesota has 5 games remaining, and is 5 points ahead of its nearest competition. Dallas has 6 games remaining, and is tied with the Phoenix Coyotes for points, with a game in hand. Phoenix is very much in the mix, and will be detailed below. Vancouver is 3 wins out of the picture with 5 games remaining. Their window is closing very quickly. Winnipeg is 3 wins and an OTL out of being tied for the wildcard 2 spot with 4 games left. This means with all probability, the Jets are out. Nashville would need 4 wins in their last 6 games to reach the point total of the current wildcard 2 spot. With Dallas having the same remaining number of games, and being 8 points ahead, it looks like Nashville will likely miss the dance. Calgary and Edmonton are bringing up the rear, and neither have more than a snowballs chance of making it. Below I will breakdown the major players' remaining schedules.

Minnesota -
vs. PIT / @ WIN / vs. BOS / vs. STL / vs. NASH
Minnesota doesn't have an easy final 5 games, but atleast all but one is at home. I am making bold predictions, all of which could be wrong. I feel they will win in Winnipeg, and at home against Nashville. I don't see them beating Pittsburgh, Boston, or St. Louis. This would finish their season with 94 points.

Dallas -
@ TB / @ FLA / vs. NASH / vs. CBJ / vs. STL / @ PHX
Dallas has an easier remaining schedule than Minnesota, but splits their remaining 6 evenly between home and away. Their final game of the season may decide whether or not they make the playoffs, and they, lucky enough, play at home. I feel they will lose to TB and STL. I can't see them losing to Florida. They will have some hard fought games against Nashville and Colombus, I can see them splitting those 2 games. Phoenix could go either way, but with home ice advantage, I have to give it to the Stars. This would give them 91 points.

Phoenix -
vs. EDM / @ CBJ / @ NASH / vs. SJ / vs. DAL
Phoenix has their path to the post season cut out for them. They should beat Edmonton easily. They too have a hard 2 games against the punishing teams in Colombus and Nashville. This could be the deciding factor for their season. I see them also splitting those games. They should fall to SJ, and on the road to Dallas. This will leave them with 89 points. 1 win out of a tie with Dallas.

If you are a Blues fan, the games to watch coming down the home stretch will be when Dalls and Phoenix play Nashville and Colombus. If either team is able to win both, or if a team drops both, it could change the outcome of the seeds. I would personally rather play Phoenix than Dallas in the playoffs. The Stars seem to have an easier path playing weaker opponents and having a game in hand on Phoenix. Only time will tell, but with very few games left in the season, it is looking more and more like the Blues will clash with the Stars in round 1.