Maybe they need to stop trying so much. Maybe they just need to do.

Coach Ken Hitchcock mentioned last night during his post-game press conference that the team hadn't "bought all the way in." That there were some who were working hard (the fourth line was particularly good - if they weren't the fourth line, the Blues may've scored another goal), and others who were not. They were overthinking, they were passing instead of shooting at open nets - they're nervous.

The "trying to do too much" that Hitch said during his bench interview last night with Brian Engblom tends to come about when things haven't been going their way for a while. They try to take the world on their shoulders, especially the top-liners (Steen staked claim on three individual times when he'd not taken the shot), over think, and then nothing happens. This happened in the playoffs last year, this happened as the season wound down in 2012, and it's happening right now.

Brenden Morrow has the money quote in Lou Korac's recap:

"We’ve just got to start from scratch to get out of these funks. Just break it down, be simple, worry about our own job and care about your teammates. Sometimes caring too much gets you in trouble and I think that’s where we’re at right now."

Hitchcock's response is to mix the lines up, to provide a spark - which is why you saw Oshie with Sobotka and Berglund last night. Now, when you have a player who is singled out to be moved from line to line as a sparkplug, what message does that send?

Here's a quote from Hitch, also from Korac's recap:

Last night the team as a whole put forth a decent shooting effort. Here's last night's Fenwick from ExtraSkater.com: 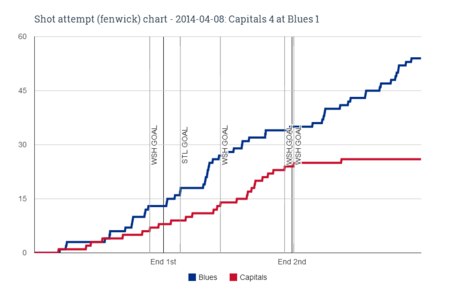 Shots! Shots everywhere! Shots attempted, shots blocked, shots that went high and wide as part of the Blues' new Brad Boyes Memorial Strategy Game Plan Effort. How many went in the net? One. Right after that one goal, the Blues just stagnated until they panicked, shot too much, got sloppy, and allowed the Caps' second goal.

Is that a matter of not trying? It's probably a matter of trying too hard. I'm not saying that they've busted their ass like this every game as of late. Here's the game against Chicago from Sunday: 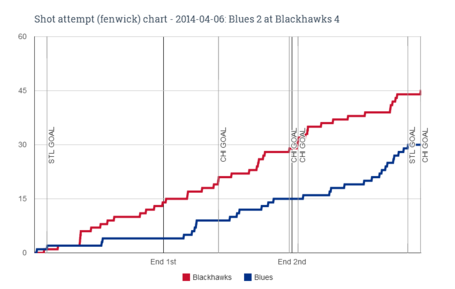 There were whole stretches of time - long stretches - where nothing was accomplished. That blue line is what apathy looks like until you look at the clock and respond with "oh, shit, we're playing a game today?!?" and then finally decide to try.

The Blackhawks game came less than 24 hours against a disappointing game against the Avalanche, where the Blues were sloppy but kept pace as far as puck control went, and still lost: 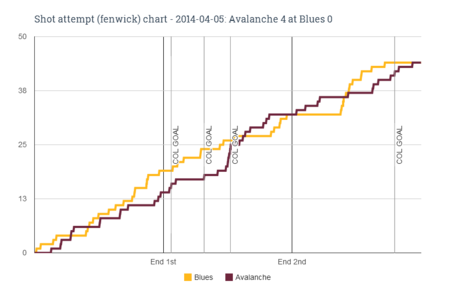 That game came after a very sloppy game against the Buffalo Sabres, who make the Blues look significantly better than they are. I question if they'd've won had this been a better team they were playing. 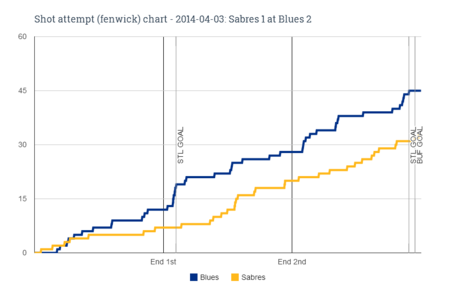 And, as the final chart shows, this game comes after one in which the Blues out-matched the Flyers in effort, and managed to win 1-0 in the shootout. 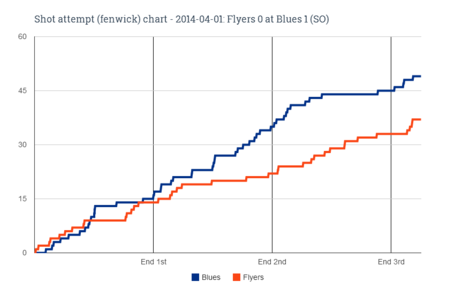 I don't know if I'm just looking for meaning in charts and stats, but there seems to be a pattern. Good game, little reward (but still a reward!) followed by a clunker with a lack of effort that the team manages to win, followed with the realization that they need to pick it up only to get shut out, followed by a game where only Jaden Schwartz's alarm clock went off, followed by a marginally better effort.

That's the pattern of a team who knows what they need to do (though sometimes doesn't feel totally like doing it when previous hard work isn't rewarded as much as they'd like), has the ability to do it, and then tries too hard to make up for it, thereby shooting themselves in the foot.

The Blues have goal scorers. They have, when the pressure isn't on them, excellent balanced scoring by committee. As the Blues get closer to the playoffs, the mistakes are mounting, the pressure is unreasonably focused on the only guys who are scoring to keep scoring more because no one else is and hey you have to carry the team, so then the top guys go dry.

They know what they're doing. There's buy-in. There's probably too much, which is why the goal-scorers have backed off and regressed to the mean. Way back in December I had a feeling that this would happen, and I called for the Blues to try to snag a pure goal scorer at the trade deadline somehow. I' saw what happens when the team cares too much and gets too nervous in the playoffs last year. They over-think. Maybe they need someone who operates on instinct instead of thought.

I'm a huge fan of hockey intelligence, but when it's keeping you from doing what needs to be done, maybe it's time to just play.