Executive Summary: Goalies do not differ in Shootout.

Finally, let's look at Shootout Save Percentage. I am going to look at 2009-10 through 2013-14. I ran the analysis here two ways. The first way was the way I have done with ES, PK, and PP. I constructed logits (ln odds of a save). I threw out the goalies whose logits were zero or undefined. All the regressions are weighted by number of shots faced. In the setting of shootouts, all goalies faced very few shots. A relatively larger number of goalies had save percentages of 1.000 or 0.000. So I also tried looking at unconverted save percentages.

Goalies are all the same.

I was a little worried that I had thrown out too many goaltenders. The logit transform normalizes probabilities and makes for valid regression analysis. Could I just run the regression on the save percentages? How does the distribution of SO Save Percentage look? 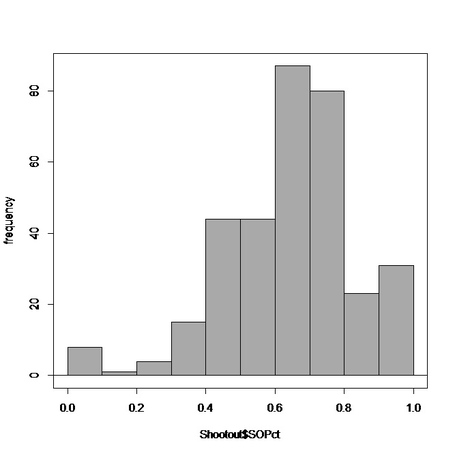 Ugh! Not a nice bell-shaped curve. Forging on and running the analysis anyway:

Still no effect there.

There is no goalie effect, just randomness.

Michael Shuckers had looked at this in 2010 and found the same thing. "Based on this analysis," Schuckers said, "I conclude that the NHL shootout is a crapshoot.