The Blues and their owner Tom Stillman were disappointed with their performance these playoffs, and they know that we are too.

The Blues know they've goofed. They turned a 52 win season into yet another first round exit; a season filled with promise became unraveled at the end thanks to injuries and not addressing key needs.

Say what you want about the decisions of the front office, but owner Tom Stillman is nothing if not completely honest with the fans. He's a fan as well; and I'm sure that he's doubly disappointed in the performance of the team. It costs his bottom line, but it also disappoints the fans as well (which also hurts the bottom line). He know how we suffer.

From @ktdare (as featured on Frozen Notes), here's the full-page ad taken out in the Post-Dispatch: 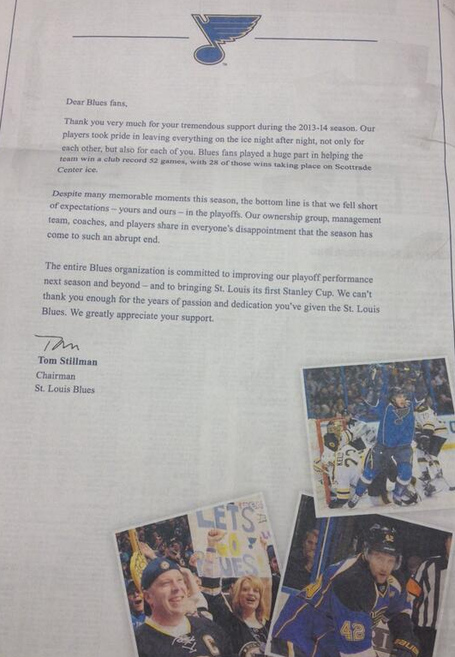 I know it's going to be grist for the mockery mill (as seen on Barstool Sports Chicago*, who whom I ask when did the Cubs "say sorry for always losing in [a] full-page newspaper [ad]?"), but it's good for an organization to recognize when mistakes were made. Do you want them plodding on in the same direction without changes or adapting? No. You do that, you get the Toronto "Randy Carlyle is great!" Maple Leafs.

This is good. Adjustments will be made this off-season, and this more than hints at it.

*nice job giving credit for where the post/photo came from, by the way.