Brad Richards Latest UFA Center Available, So Who Do The Blues Go For?

The Blues need a center in the worst way - are there any worthwhile on the market that won't cost the Blues in a trade?

Share All sharing options for: Brad Richards Latest UFA Center Available, So Who Do The Blues Go For?

We all agree that the Blues need a center for next year. They also needed one for last season as well, but better late than never.

Where the debate(s) come in are in regards to a) if the Blues should trade for one or sign a UFA, or b) which center they need to go for. I will leave Spezza out of this discussion for right now, because I think we all know what Ottawa wants - an impact player, a prospect, and a first rounder. I don't know about your guys, but the Blues tossing around fairly ok prospects and high picks concerns me, only because they've done it a few times in the past couple seasons, and I don't want that well to run dry.

According to CapGeek.com, these are the top UFA centers available right now. Brad Richards is the latest addition, but that wasn't unexpected. 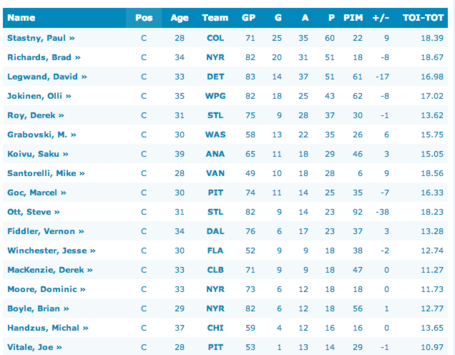 I will assume that despite his obvious feel-good STL connections, Joe Vitale is off of the list. Two of the top UFA centers are Blues - Derek Roy and Steve Ott. Ott may be re-signed by the team.

So, where does that put the Blues? I will assume that anyone above Roy not named "Olli Jokinen" would be worth looking at, as would Grabovski. David Legwand's season was not an impressive one, let's be honest, though his 37 assists would be a marked upgrade from Roy. However, he more than likely is not the center that Jaden Schwartz and Vladimir Tarasenko need, and Legwand's more likely to center the third line than Vladimir Sobotka.

Basically, that leaves Paul Stastny and Brad Richards. Stastny made $6.6 million a year for five seasons in his last contract with the Colorado Avalanche. The Blues will have $21,783,333 of cap space with nine forwards signed right now. Patrik Berglund, Sobotka, and Jaden Schwartz are all RFAs.

The Blues have the cap space to afford Stastny. The issue is if they want to tie up a decent amount of money in him. Richards' buyout has freed the Rangers from an absurd contract deal that would've paid him $8.5 million a year next season. He's not worth that kind of money. He may be available for less than Stastny.

So, it boils down to this: would you prefer the Blues get aggressive with Stastny and lure him away from re-upping with the Avalanche, or would you like to see Brad Richards in the Note?