TSN's series on the homecoming of hockey players moves stateside, and Buffalo and Minnesota seem to be the best of the bunch.

Share All sharing options for: Blues' "If Hockey Players Went Home" Homecoming Is Kind Of Awful

In case you missed it, LeBron decided to return home to Cleveland to play the next couple of seasons with the Cavs. Good for him. Hockey writers immediately applied this idea to Steven Stamkos and John Tavares, because who wouldn't want to come home to Toronto to play for a non-playoff team that's constantly in disarray, right?

TSN took this idea and applied it to their Canadian teams, with interesting results. Toronto'd be a powerhouse except for the fact that Steve Mason'd be in goal (is that the best you can do?), the Flames'd still be meh-ish, the Oilers'd improve with a top defensive pairing of Dion Phaneuf and Jay Bouwmeester, who I assume would just stare opponents down. Winnipeg might even have a chance!

TSN highlighted the ten best American teams, and this Blues' squad made the cut. It should tell you about the other 13 American hockey clubs. 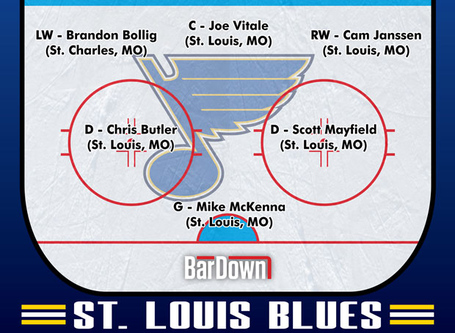 I know what your first thought is when you see this - I had the same one too. Where the hell is Ben Bishop and Paul Stastny? Chris Butler's there - and he's just had a nice little homecoming, but nothing like the Stastny press from the team.

They selected players who were born in the area of the team, and Bishop was born around Denver, so he's on the Avalanche. Stastny, of course, was born in Quebec, so the Chaminade product doesn't make the cut. Joey Vitale, though!

My second thought when I saw this for the first time is that apparently Hitch really is going to have to ratchet up the "grit" and "intangibles" here - if you consider "beating the fuck out of everyone in front of you" an intangible. I consider it pretty up-front.