Brett Hull Was The Greatest Blue Of All Time. Right?

ESPN's list of top franchise players doesn't include any surprises for the Blues.

Share All sharing options for: Brett Hull Was The Greatest Blue Of All Time. Right?

It's next to impossible to not look back through the years of the Blues and say that Brett Hull's tenure was anything less than amazing. In eleven years with the franchise, Hull has 527 goals with the team, which is a franchise record that I can't see being broken any time soon. The eight-time all star is second on the Blues' points list with 936 and is third in all-time league goals with 741. Here're Hullie's stats with the Blues, from STLBlues.com: 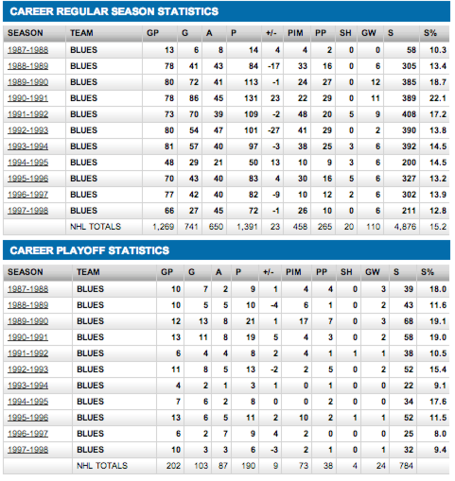 When I think of my childhood obsession with hockey, Hull is a tremendous portion of it. It's tremendously difficult for me to say that he's not the greatest Blue of all time. However, age has impacted my opinion here. I missed some of the other great players to put on the Note - some of the other players that you guys have a soft spot for.

To me, and to the folks at ESPN.com, Hull is the greatest Blue ever. I'd like to hear what you say - who is St. Louis Game Time's greatest Blue? Leave your answers in the comments. Before you decide, I'll just leave this right here: