The Blues' new duds are a blast from the past, and a back to basics look. Say so long to the RBK Edge era.

Oh man, oh man. The Blues new jerseys? Gorgeous. Sure, that's my personal opinion, but I have a feeling that a lot of you guys will share it. What do these look like?

Why, they look like the CCMs and KOHOs that I'm sure most of you have in your closet. Those jerseys, which began as an alternative to whatever the Clown Jersey was, are the closest that the Blues have come to a solid jersey since the '70s. It's a traditional, clean look. The NHL-wide shift to RBK's futuristic piping filled designs have been shifted to a classic clean Reebok cut, because it's not futuristic anymore.

It doesn't do anything to change my personal issue with the type of lightweight material they're made out of, but as far as looks go, it's a return to traditionalism. There are some places tradition just works, and the hockey arena is one of those places.

Kudos to the Blues organization on a great re-design. While I'm at it, kudos on a great website re-design to boot. 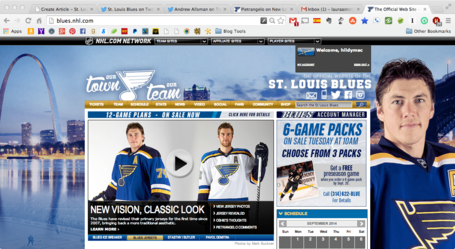