In an evil bid to make everyone who was a fan in the 90s feel ancient, Brett Hull is aging. Here's a look back at the Golden Brett.

Sports stars have an uncanny ability to make us feel both very young and very old at the same time. Whenever I watch highlights of Brett Hull, I feel like a kid again. When I look at Hullie now, I feel ancient. Not helping the issue is that today is the greatest Blue of all time's 50th birthday.

Hull seemed ageless in his youth, cocky and fun. He always struck me as a big kid. Appearing on Letterman after his 50th goal in the 1989-1990 season (one in which Hull would score 72 goals), Brett exudes this. He's brash and filter-free. It's easy to see how he could possibly rub other strong personalities the wrong way (*coughKeenancough*), but as a bigger than life star in a mid-market city, Hull was a breath of fresh air.

"I don’t like Brett turning 50," said Brendan Shanahan, another ex-Blue. "To me, that’s sort of like a realization that your kids are growing up. I always saw Brett as a big kid. But I guess the truth of the matter is that it probably doesn’t matter that he’s turning 50. He’s probably the same big kid."

His mullet is also amazing. I don't think that interview does it justice, but I do believe that this Midas commercial from 1991 does.

We all know that the mullet isn't why St. Louis became a hockey town, though. We're familiar with the slapshot, the celebration, the goals. This is why the Blues, despite their lack of playoff successes, are beloved - the potential of that excitement. The potential of maybe, one day, having another player who can do all of this:

The Blues already have young defensemen who could be like Pronger and MacInnis. They have exciting players. They've never lost the grit. What they have lost, unfortunately, was Brett Hull in his heyday. Hull isn't as trim as he once was, though Kelly Chase's description of Hull is that he "is bigger than he should let himself get, but he’s in pretty good shape for a guy that’s in that kind of shape."

So, basically, here's an artist's rendition: 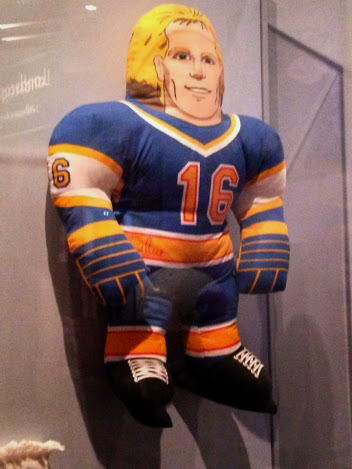 The biggest impact Hull may have on the franchise is in the front office. The Hall of Fame inductee would be ok with a late birthday present if it's chalice-sized. The team's management team is proving that they're not hesitant to do what they feel is needed to get the Blues a step closer. With Paul Stastny, Jori Lehtera, and dynamic youngsters like Ty Rattie, maybe that birthday gift won't be too late after all.

"In all honesty with Brett, you would never see a bigger smile on a guy’s face than if we won the Cup and he’s in the parade on Market (Street)," Chase said. "That sounds corny, but the point is, it’s really the truth. He always talks about ‘when we win, when we win, when we win...’ So I think if you could give him anything, it would be that. To see it happen in this city, he’d be jacked."

"Absolutely," Hull said, "that’s the No. 1 present right there. We’re working on it right now."

Nothing would make Blues fans happier than winning the Stanley Cup, but to see Hull finally hoist it in the city where he played his greatest hockey would make an already sweet moment even sweeter.