***note I posted this on another blog that I do for fun (jbhockeythought.blogspot.com) but thought it could be of interest here. All stats are taken from Natural Stat Trick

It has been the talk of Blues Twitter all season...which has felt like 82 games instead of 3: Is Jake Allen terrible or is the defense terrible? The loudest proponents have said that it is solely on one or the other. A quiet minority, including myself, have surmised that it is a combination of both. The goal of this article is to lay out what is occurring and show how the defense and how the goaltending relates to the rest of the league. Court is now in session, the honorable stat nerd Jason Bradshaw presiding.

To analyze this we will be using the advanced metrics surrounding high danger and medium danger scoring chances. This early in the season low danger chances going in are anomalies and would be ammunition to just blame the goaltender.

The Plantiff: "The Defense is All to Blame"

The St. Louis Blues defense to quote @johnjf125 on twitter "has been ass" so far this season. High danger scoring chances are typically created by defensive lapses or great offensive ability. The St. Louis Blues are allowing 13.33 high danger chances per game. That is 8th highest in the NHL. Last season the Blues had the third lowest high danger chances allowed per game at 9.89. A major strength of last year's team has been an early detriment to the team's offense. 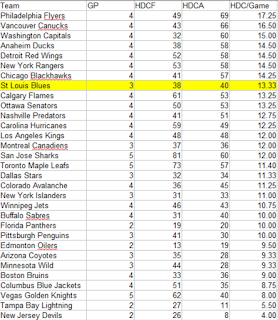 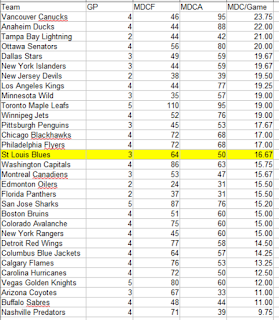 The Defendant: Fire Jake Allen Into the Sun

Jake Allen has been a constant debate among Blues fans since he was named the full time starter. Expectations skyrocketed for Allen after his 2016 playoff series versus Minnesota. Watching his game one performance in person was the greatest sporting event I have ever witnessed. However, with Chad Johnson as his backup this season a lot has been placed on his shoulders. We will examine how his save percentage looks at times when he needs to come up large.

This season Jake Allen has a .750 save percentage on high danger chances. The Blues rank 2nd to last in the NHL in this category. To compare last season the Blues were eighth worst in this category last year at just over .850. In the early going however, Jake Allen is save percentage on high danger chances is 10 percent lower than a season ago. That simply needs to improve. 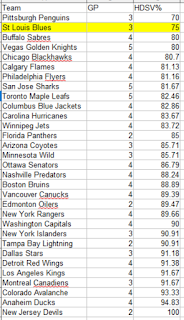 When we look at the same statistic on medium danger scoring chances Jake Allen has been okay in that regard at .940 tying the Blues or 14th worst in the league. This is a downgrade from last season when the Blues ranked 10th best at .957. 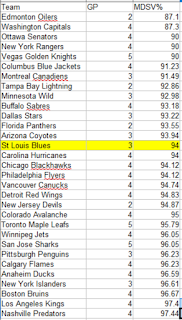 Simply put there is plenty of blame to go around. Jake Allen needs to make bigger saves like he did in the 5 on 3 PP last game. However, there has been a high drop off as well in the amount of high danger chances. Using these figures I computed the number of high and medium danger chances that occur for every goal scored. Based on that figure I computed an expected number of goals per game to be scored at each high and medium danger using the following formula: (high chances seen below)

I then took and added the numbers calculated for high danger and medium danger together to see how many goals each team could expect to give up in these areas (Note Jake Allen has not allowed a goal this season from a low danger scoring area). The following results were yielded. 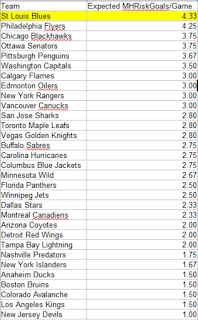 The St. Louis Blues are the worst in the early going in the NHL in allowing goals in the high and medium danger scoring areas. The defense is not helping Jake Allen at all. The increase in chances allowed from high danger areas is alarming. However, Jake Allen is only stopping 3 out of every 4 attempts on those. If the Blues are going to be successful and potentially make a deep playoff run Jake Allen needs to be better than he has been. I think a way to increase Allen's success would be to stop putting him on the spot so often but as it stands this court rules against both. You cannot put sole blame on the defense or Jake Allen. The stats don't lie.